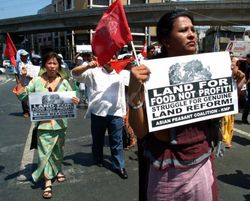 This summary by Michelle Rostampour

In their newly released article Borras and Franco detail the diversity of outcomes and arrangements falling under the blanket term ‘land grab,’ examining transfers of ownership and control of land and the implications of political processes as reflected in land policy. Including case studies from recent field research in Mozambique, Cambodia, Philippines, Brazil, and China, they examine changes in land use and property relations, establishing categories for analysis and laying a framework for future studies on land grabbing.

The concern of this phenomena, in the words of Borras and Franco, is that “national governments in ‘finance-rich, resource poor’ countries are looking to ‘finance-poor, resource rich’ countries to help secure their own food and especially energy needs into the future [and] today there is new momentum building behind this idea that long-term control of large landholding beyond states’ own national borders is needed to supply the food and energy needed to sustain their population into the future” (37). The increase in global land grabbing, linked to increasing incentives for producing biofuels and food-for-export, heightens food insecurity and increases the dependency of ‘finance poor’ countries (where land is being targeted) on international markets. For Borras and Franco the importance of their research is to formally confront changing patterns of land ownership, catalyzed by the “convergence of global crises (financial, environmental, energy, food) in recent years [contributing] to a dramatic revaluation of, and rush to control, land, especially land located in the global South” (36).

In this context, the goal of the paper is to “contribute towards a better understanding of the character and dynamics of current land grabbing” (36). A consistent emphasis of the paper is that practices of land use changes and impacts on social dynamics are diverse. They address the biggest sites of contention/activism linked to changes in land use that shift use to production for export (for food or biofuel) from production for local use, detailing the distribution of bio-fuel and especially focusing on less-publicized domestically-oriented uses. Conversions in land-use (from forests, grasslands, wastelands, etc to food lands) are also detailed along with other changes brought by the transfer of land control, such as the commoditization of food in agrarian societies. While careful in their criticisms, they do discuss peasant dispossession/displacement and the controversy of “marginal lands” and evictions and disruptions of local practices.

The article addresses the re-appropriation of the concept of land grabbing, arguing that, because it has been used as a “catch-all” phrase to describe a range of actions, the concept is “vulnerable to capture” (35) by those who stand to gain from its continued existence. In other words, eager to recast any bad publicity, land grabbing investors (including transnational corporations, foreign governments, and/or national governments) tend to harm the environment and local populations alike, but, meanwhile, claim to establish systems that benefit the poor, with claims of new economic opportunities for those whose land they take and whose lives they disrupt.

Largely because political actors themselves are involved in such transactions, Borras and Franco assert that we cannot rely on official documentation to tell the story of land-based social relations. Instead we must identify ownership and control over land resources and “the nature, pace, extent and direction of surplus production, distribution and dispossession” (50). They argue that land changes, influenced by land policies (themselves embedded in power configurations) tend to show preference for the more powerful local actors (dominant classes, state officials, bureaucrats). They emphasize that the nature of “land grabbing,” varies according to time and place but that diverse outcomes are concealed by state-simplified standard categories on property rights—thus the need for on-the-ground observation like that which informed their work on this paper.

In their view the dynamics and impacts of land-use change is best understood from a class analysis perspective. Implicated in the throes of land grabbing are “rural working classes” (poor peasants, a diversity of subsistence, small-scale farmers, women, men, indigenous peoples, etc) and groups who—along with the privileged classes (officials, moneylenders, rich farmers, etc)— will be affected differently by changes in land-use.

While they provide specific examples of dispossession and displacement, they also illustrate less disastrous cases of changes in land property relations. A concern of theirs is misinformation, and they are clear in their assertions that land grabbing is not responsible for all peasant struggles of our day: “Any analysis of current land grab-induced changes in property relations should be located in the bigger picture of agrarian change dynamics: not all displacement/dispossession today is a result of land grabbing, and not all land grabbing results in displacement and dispossession” (52). According the authors, the greater concept of land reform is not well understood and is required for a better understanding to develop regarding the outcomes of displacement and dispossession and access of the rural poor to control over land.

In addition to their other criticisms, Borras and Franco are critical of the emergence of “code of conduct” and “responsible agricultural investments,’ believing them unlikely to ever promote processes favoring land control for the rural poor. They argue that the framework is focused not on responsibility toward the rural poor but instead on transparency, cost-efficiency, and speed of implementation. Even in situations where negotiations are located at the local, community level, the rural poor are in a position of disadvantage, they argue, citing the example of Procana plantation in Mozambique as evidence of this consistent imbalance of power. In this critique they clearly outline the hypocrisy of multinational organizations such at the World Bank, FAO, IFAD, GTZ in denouncing land grabbing (preferring the sugar-coated term, “large-scale land investments”), while meanwhile supporting policies that directly open channels for the promotion of land grabbing.

This article, meant to expand and challenge discussions of land grabbing, deserves the time and attention of those concerned with changing patterns of land ownership and correlating social relations. It is also relevant for those focused on associated political questions as well as issues of global environmental justice.

Read the journal article in the attached pdf.