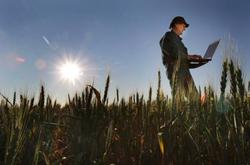 PARKES, Australia (Reuters) - Outback Australian farmers - hardened from dealing with extreme weather, fires and pests - now have to wrestle with modern trading tools and technology after a tough day tilling the land as they adapt to the rigors of a deregulated market.

For many, especially older farmers facing a bewildering host of new choices, the changes mean they may miss out on the best prices or even come under pressure to sell up to bigger farmers or foreign investors.

Farmers visited during a Reuters crop tour in eastern Australia last month had mixed feelings on the ending of the monopoly held by the Australian Wheat Board (AWB), which meant they now had to keep close tabs on day-to-day global prices.

"They're not used to things like forward selling, futures and hedging, preferring the old system where they just delivered to the wheat board under the single desk system," said Dunford.

Some older farmers were also less technologically savvy than younger farmers or lacked the business skills required to market wheat on their own after the single desk system ended three years ago.

For nearly 60 years until 2008, AWB had sole marketing rights over the country's wheat export sales.

When restrictions were eased, commodities giants such as Cargill Inc and Glencore International swooped on the world's fourth-largest wheat exporter, eyeing it as an opportunity to gain a new source of grain.

Canada, the world's second largest wheat exporter, is the last major western supplier to operate a wheat marketing monopoly through the Canadian Wheat Board that has had sole marketing rights since World War Two. But the country's conservative government plans to abolish the system in August, 2012.

Australia's decision to free up the market was one many smaller farmers opposed, as they liked the system that allowed them to deliver into AWB pools while concentrating on growing grain.

"Under the old style wheat board you knew what you were going to get (in terms of price). Our wheat board was very efficient as they knew how much wheat they had and how much they had to sell," said Brian Johnston, 55, who farms an area some 400 km north of Sydney.

He said farmers now had to fire up their personal computers virtually everyday in an effort to get the best rates in a volatile wheat market.

"I can't work a computer so my wife does all that -- the young blokes can handle them ... they're computer literate but not me," said Johnston who has worked on his property since he was 15.

Global wheat prices have been volatile this year. The Chicago Board of Trade's spot month contract hit a high above $8.93 per bushel in February on concerns of dry U.S. weather, but struck a low near $5.65 at the start of July as Russia and Ukraine relaxed export restrictions.

Prices have climbed back to above $7.00 since then, in line with rising corn prices.

Other farmers have got used to the new system, though they are still building up expertise.

"There's hedging products -- risk management stuff -- you can sell any amount of grain forward but that's pretty tricky at this time of the year when you don't know how much will be produced," said Jock Coupland, one of the largest grain growers in the Condobolin district of the NSW mid-west.

The government's chief commodities forecaster estimated in June that the 2011/12 harvest could be 26.2 million tonnes, near the record 26.3 million tonnes in 2010/11, though some private estimates were lower.

"I used to deal with AWB until they abandoned the single desk but I don't mind it -- in fact I quite like the new system," said Coupland.

But Adam Davis, a senior commodities trader at Merricks Capital, said the new system had some deficiencies.

"There's a plethora of so-called risk management and consultants out there to advise whether to put your grain into a pool, and which one, or sell to a trader," said Davis.

"I don't know how a farmer can work out what he can get from a pool or whether he should wait to harvest before selling. It must be very confusing," he said.

Davis added that farmers had expected better prices because of competition among buyers but these gains had been whittled away by supply chain inefficiencies.

GET BIGGER OR LEAVE THE LAND

Davis said farmers were being forced to rethink how they did business.

"We're going through that generation change where you are just going to see the big guys get bigger and obviously the number of farms are going to shrink," said Davis.

Foreign interest in Australian farmland is on the rise as countries such as Qatar seek to secure food supplies, while existing farmers are buying more land to achieve economies of scale, allowing them to use more machinery and less labor.

Some farmers, struggling to make a return because of prices, new marketing options and adverse weather, have been tempted to sell, realizing they either have to get bigger or leave their land.

"There's a lot of land up for sale because the older guys are selling up and there's not a lot of us younger farmers," said Grant Orr, 26, a grain farmer near Parkes, which is about 480 km west of Sydney.

"There's no neighbors around here anymore. There's an Englishman who has bought up a lot of land around here as an investment I suppose but he only comes once or twice a year," Orr said.

"There's blocks everywhere that are coming up for sale so it is likely they will end up in foreign hands like the Chinese and Middle East buyers."

Orr said he was not against foreign investment but he was worried that state-backed companies were buying land to secure their own food supplies.

"I feel that Australian farmers should be growing food and supplying it to countries that need it," said Orr.

Orr and his brother Tim, 34, do not oppose the new system, although they consider it an extra chore.

"Last season we sold a lot of grain at harvest time as we were happy with prices and the fact that we got cash in the hand then but I still spent about a quarter of my time dealing with marketing," he said.

Pools offer up-front partial payments that help cover costs but the option of selling for cash at harvest time is attractive if prices are good enough to deliver a profit.

"Under the new system they also have more control over prices as they can warehouse grain or store it on farm ... so traders have to be more competitive to secure supplies," said GrainCorp spokesman David Ginns.