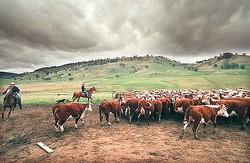 Australia's sweeping plains are being overrun by rural raiders from overseas. Leonie Lamont and Paddy Manning explain how the humble back block has become global hot property.

It's not news that legendary global investor Jim Rogers likes agriculture and just about every bushel or belly that springs from it.

''We don't have enough farmers. We have to do something or we will have no food at any price at times in the next few years,'' Rogers said after recent deliberations on world food security at meetings of the G20 and the United Nations Food and Agriculture Organisation.

While the organisation states the good harvest over the next few months should reduce commodity prices from the ''extreme levels'' seen earlier this year, the next decade is another matter. Real prices for cereals will, on average, be 20 per cent higher, and meats 30 per cent higher compared with the past decade. To put it in perspective, these increased prices do not mean a return to the peak commodity spike of 2007-08 and the associated food riots.
Advertisement: Story continues below

Cue Rogers, and his message that agriculture is one of the few bull markets he can see in coming years. So prescient that Time magazine lately took up his pearls of wisdom, headlining: ''Want to earn more than a banker: become a farmer.'' Barely a nanosecond passed before banking brains asked why pull on the RM Williams when you can buy a farm, install a farm manager and have two income streams.

The Herald's review reveals that bankers, superannuation funds and agribusiness are buying rural land in NSW at the same time that foreign private and sovereign wealth funds with specific food security briefs are securing land holdings. Among them, they spent $330 million, buying half a million hectares in the past year.

Citi analyst Tim Mitchell recently studied these ''rural raiders'', identifying more than $12 billion worth of direct overseas investment in agricultural businesses and land in the past four years. It spanned the breadth of the country and agricultural sectors, from the Packer cattle properties ($425 million by US private equity firm Terra Firma) to the $1.74 billion sale of Sucrogen to Singapore's Wilmar and the $20 million worth Murray-Darling basin water licences sold to California's Summit Global Management.

Foreign demand has helped support asset prices, with transaction multiples at attractive premiums to trading multiples. Citi estimates the average purchase price is nine times the companies' earnings. Its figures show the average land value per hectare has risen from $120 in 1994 to about $510 in 2010 - a compound annual growth rate of about 12 per cent.

For the same period, Mercer reports that Australian shares returned 10.2 per cent; fixed interest 7.5 per cent and unlisted commercial property assets 9.2 per cent.

Typical of investors scenting an opportunity, Swiss bankers Daniel Koppel and Walter Wehrli are behind a string of farm purchases in southern NSW, their companies parting with $8 million.

Their Australian director, farmer and real estate agent Angus McLaren, said Koppel and Wehrli had taken the view agriculture was a good place to park their money.

''They looked around the world. The Australian market is very good: our governance, security and land tenure and infrastructure when you compare it to South America or Africa,'' he said.

The pair plan to increase their holdings, and offer long leases to local farmers. The aim is a 5 per cent return, and capital gain when they sell in 10 years. McLaren said land values have tripled in the area in the past 10 to 15 years.

''It really is win-win what we are doing,'' he said. ''A lot of young guys out here are still interested in farming, but they don't have the capital. This has given them an opportunity.''

Chris Meares, a land agent and rural property specialist at Meares Associates, said while local buyers had struggled to obtain credit in the past two years, institutions were looking for good investments.

''Institutions want to buy the factory as cheap as they can. Because they have quarterly reporting, they want to generate income really, in preference to capital growth. They will go in and buy cheaper land with minimal improvements,'' he said.

''What's happening here is there's a lot of public outcry about overseas investors buying farms. Facts are, the only reason they're buying the farm is because the opportunities are there and they're getting little competition.''

Australians do realise the value of what is being sold, he said, ''but their hands are tied because they can't raise the money''.

Money appeared to be no object for Macquarie Group's wholesale fund, Paraway Pastoral, which spent $80 million buying a quarter of a million hectares. Launched in 2006, the fund aims to raise up to $1 billion to tap into world demand for red meat. Marketed domestically, and in the US, Britain, Canada, Singapore, Hong Kong, Japan, the United Arab Emirates and the Netherlands, it is now a dominant landowner, and counts sheep and cattle in the hundreds of thousands. Macquarie Group was unable to grant BusinessDay's request for an interview.

Meat was also on the agenda for Brazil's JBS, the world's largest meat company, which added a further 1800 hectares through a $17 million acquisition in the Leeton area.

Cargill also has its fingers in the market, with its subsidiary, Black River Asset Management, buying 2100 hectares in the Bland shire for $4.7 million through its entity, BFB Pty Ltd.

Foreign pension funds have continued to show interest in crops and forestry. The Australian subsidiary of Westchester group of the US, which describes itself as one of the largest owners of cropland in Australia with about 73,000 hectares under management, paid $16.65 million for farms.

Australia's Sustainable Agriculture Fund raised $145 million from seven institutional and wholesale investors, including Australian Super and AMP Capital, and invested nearly 10 per cent of the money in 1150 hectares in the Murrumbidgee area through its trustee and manager, Australian Farms Fund Management Pty Ltd.

His short-term prognosis for agriculture is ''volatility'', with prices driven by normal supply and demand fluctuations. World population growth, improved standards of living in China and India, and increased competition for land from energy and biofuels, are fundamentals which would underpin agricultural land values.

''Long term, I agree with Rogers very much. That doesn't mean that land values are going to be going crazy in the next two to three years, but I think they will increase and the rate will speed up.''


Investments pour in from far and wide

Paraway Pastoral Company Ltd
• Biggest rural land investor in NSW last year. The operating entity of the Macquarie Pastoral Fund, domestic and international investment. Since its 2006 inception it has bought 3 million hectares in Australia, and can run 200,000 cattle and 200,000 sheep. Many recent NSW purchases were by Swire Group, which divested itself of its Clyde Agriculture holdings.
• Purchases: $80.12 million
• Area: 223,795 hectares
• Where: Murrumbidgee, Hay and Warren (local government areas)

Hassad-Australia Pty Ltd
• Hassad Food, the agriculture arm of a Qatari sovereign wealth fund, is investing throughout the world with the primary purpose of achieving food security for the Gulf states. It bought five properties in NSW last year ranging from $2 million to $10.8 million, including sheep and cattle stud farms.
• Purchases: $35.77 million
• Area: 11,800 hectares
• Where: Cabonne and Warren

Ho Myoung Farm
• Owned by the Korean Young An group, the self-made corporation of billionaire businessman and philanthropist Baik Sung-hak. Mr Baik made his money in the hat trade, accounting for about a third of the global market in baseball, cowboy and dress hats. Goat, sheep and cattle for the domestic and export markets.
• Purchases: $2.7 million
• Area: 178,576 hectares
• Where: Bourke and Central Darling

IAI Australia Fund II
• The International Agricultural Investors fund, run by the Australian subsidiary of the US Westchester Group, is a booming vehicle for international pension funds. The Swedish National Pension fund will place $240 million in a joint venture to buy and manage farmland in Australia with the Teachers Insurance and Annuity Association of America, which owns 85 per cent of the Westchester Group. Interest in grain production.
• Purchases: $16.65 million
• Area: 4379 hectares
• Where: Moree Plains, Gunnedah, Warren