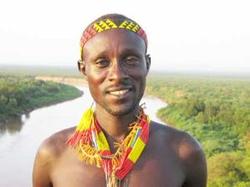 A tribesman near the Omo River in Ethiopia. Rights and environmental groups say traditional life in the area would change for the worse if the controversial Gibe III dame is built. (Photo: Courtesy International Rivers)
Voice of America | July 28, 2011

A human rights group has accused the Ethiopian government of leasing some of its most productive farmland to foreign companies. Survival International said the Omo River region is the traditional homeland of some 90-thousand indigenous people.

The group said Malaysian, Italian and Korean companies are buying leases; and that large areas are being cleared for state-run plantations.

“The government announced that it was going ahead with the huge sugar cane plantation known as the Kuraz Project. We know that there are leases given out to other foreign companies. For example, an Italian company, which is leasing 30,000 hectares to grow palm oil,” Fiona Watson, Survival International’s field and research director.

Survival International said the government has failed to consult the indigenous people, who would be affected. “Leasing of their land without their knowing about it,” said Watson, “is going to create enormous problems for them.”

The government rejected the group’s allegations. Spokesman Simon Bereket said it was official policy to inform and consult with local populations.  “That is the normal practice in Ethiopia,” he said, “mandated by the constitution to be discussed by all peoples.”

He added, “As far as I know the indigenous people are very supportive of the government. These are indigenous people who had been neglected for centuries, never been considered to be Ethiopians. It’s only now or last 20 years that their identity has been recognized and protected.”

Watson said the projects threaten to destroy the way of life for the indigenous people near the Omo River.

“By and large, the tribal peoples of the Omo Valley are self-sufficient people, who have perfected techniques to live reasonably well in what is a difficult environment. If the leases go ahead…they’re going to lose all the ability to be self-sufficient.”

Many are nomadic cattle herders. Others rely on the seasonal flooding of the Omo River to deposit silt on the farmland, making it more fertile.

Who owns the land

However, the government said private property is not an issue in the Omo valley or elsewhere in Ethiopia.

“Technically, land belongs to the government. Land is not private property in Ethiopia. So, it is basically the government who owns the land of the country.”

Watson said, “It’s true that the government says that. That doesn’t necessarily make it right. And under all sorts of international conventions and laws, it is recognized that indigenous and tribal peoples should have the right to collectively own their land. In fact there is a clause in the Ethiopia constitution, which says that nomadic pastoralist peoples, which includes most of the people in the Omo Valley, have the right to use land freely to practice their pastoralism.”

Survival International said government plans for relocating the people to villages would create more poverty and hunger. It said a similar project in the 1980s by a former government, “had an incredibly negative impact.”

Survival International has also been a long time critic of the Gibe III damn under construction on the Omo River. It said the dam would end the seasonal floods benefiting farmlands and adversely affect water access in the region.

“If you look at the land leasing in conjunction with the dam it’s like a double whammy.” Watson said.

Bereket disagrees. He said, “There is no way, no way that this government would trample upon the rights of such indigenous groups.”