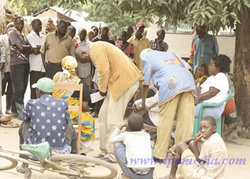 Villagers of Namwawala raise their complaints to a team of Legal and Human Rights Centre experts.
The Guardian | 20 July 2011

Land-Grabbing is slowly becoming a serious problem in Tanzania with the poor being turned into landless citizens in their own country in the name of foreign investors.

Some Tanzanians have lost confidence in the country's leadership, opting to form their own teams to fight for their land rights.

District officials have come under attack for failure to defend the land rights of their subjects like the case of Kilombero district in Morogoro region.

Residents of Namwawala village, for example, have, in recent years, been complaining that district officials are forcing them to give their land to investors for sugarcane farming.

A fact-finding mission of the Legal and Human Rights Centre and HAKIARDHI in 2009 discovered that 10,000 villagers would be made landless when 9,272.54 hectares of their land would be given to a sugarcane investor.

A study by the two organizations shows that the disputed land in the Ruipa valley involves four villages of Kisegese, Mbingu, Mofu and Namwawala.

Tracing the history of the land in dispute, the fact-finding mission interviewed villagers at Namwawala and some senior district officials whether or not the land has been taken by an investor.

However, the project did not take place until 2005 when SUDECO's successor, the Sugar Board of Tanzania (SBT) revived its earlier plan of seeking an investor for sugarcane plantations. It is yet to be known why the project failed to take off.

According to Nzyela, the project area is estimated at 9,272.54 hectares making 62 percent of the land for the affected villages. In the 1970s the total project area was divided into six blocks A, B, C, D, E and F. However, blocks D, E and F were later occupied by people and registered as villages, later to be abandoned by SUDECO.

The office of the District Executive Director says that SBT is just a promoter of the sugarcane farming project because of its expertise in the industry. This assertion, however, is in sharp contrast with explanations given on May 26, 2009 by the District Administrative Secretary Evarist Thomas Mbagga who claimed that the owner of the disputed land is SUDECO.

Hence, it is unclear which government entity holds the disputed land; neither did the district officials show the existence of any Government Notice (GN) declaring the land to have been acquired (by the President) for that purpose. The only proof available is a map indicating the existence of the project area although its validity and legality is questionable.

Whereas district officials accuse the village’s committee as the source of an increasing tension in the area, findings by the LHRC and HAKIARDHI show the opposite.

According to evidence collected from different sources, the real sources of conflict are two fold; namely lack of transparency (openness) in the process of establishing the said investment and non-participatory decision-making in matters affecting villagers’ interest in land.

This contravenes the objectives of the new land laws which call for all citizens to participate in decision-making on matters connected with their occupation or use of land.

For instance, todate the real owner of the disputable land is not clearly shown as well as the expected investor. The fate of the victims is also not clearly stated as no alternative land is prepared and or allocated for their settlement after eviction. Above all, villagers complain that they are dictated to endorse and implement orders from above.

This is proved by a letter dated 1/2/2005 with Reference No.KDC/M.40/1 which was written by the then Acting District Executive Director, one O.O.Mpombo, who ordered the chairpersons of the four villages to prepare the minutes of the village councils’ meetings and of the general assembly showing their consent to give land to Ilovo Sugar Company in their areas. Its title reads: “YAH: UMILIKISHAJI WA ARDHI KWA KAMPUNI YA SUKARI (ILOVO) KATIKA MAENEO YA BONDE LA MTO RUIPA.”

The minutes were required within nine days. It is obvious that this order required an unordinary (emergence) village assembly, the practice which isn’t the procedure.

Due to these reasons, people resorted to establishing the committee during their village general assembly on January 31, 2009 to inquire on their fate. The mandate of the committee, according to villagers, was to seek a clarification of the statement alleged to have been given by the DED on the January 27, 2009 through Radio Pambazuko FM of Ifakara, requiring them to prepare themselves for valuation by reason that the President was to acquire the said piece of land for investment purposes.

This action of the people has resulted into the ongoing dispute of the arrest of committee members.

When the news broke for the first time, villagers were told that the President owned the land and that he had ordered their eviction. This, however, did not augur well with most villagers who now seem aware of their land rights. In their report, LHRC and HAKIARDHI specify clearly the procedure that a president may use to take the land in accordance with the laws of the country.

Presidential acquisition is regulated under The Land Acquisition Act of 1967 [2]. Part II of the Act empowers the President to a compulsory acquisition of land for use by the corporation within the community or agricultural development but subject to prescribed procedures.

There are three stages in the process. The first stage is preliminary investigation of suitable land for the intended purpose. Under this stage the responsible organ, among others, conducts a survey together with clearing and setting out boundaries of the proposed land [3].This is what SUDECO did in 1976.

The second stage is giving notice of intention to take the land after the President is satisfied with it. This notice should be within six weeks. This is given by the minister on his behalf [4]. Lastly, taking possession of the land: This is done after the compensation is completed and due notice as per Section 7 (1), 8 and sub-part (b) of the Act above.

Generally, procedures under Section 4 (3) (a)-(d) of the Village Land Act, 1999 are not proved to have been followed in transferring the disputed land.