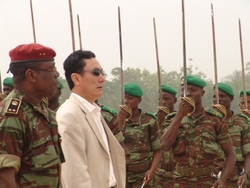 A delegation of Chinese agricultural engineers and entrepreneurs decided to invest at least 1 billion CFA Francs ($2.15 million) in Benin’s palm oil industry after a visit to the western African nation.

Benin has vast untapped lands that could be used to produce palm oil and increase the output of agricultural products, the state-owned Office de Radiodiffusion et Television reported today, citing Geng Wenbing, Chinese ambassador to the African country and chief of the delegation.

The Chinese will invest in the industry over the next five years to increase production and mechanize the industry. Palm oil is highly sought after in China for the manufacture of various food and cosmetic products.

“The funding plan and the amount will be announced by Chinese entrepreneurs toward the end of the year,” Benin’s Minister of Agriculture Sabai Kate was cited as saying by the Cotonou-based broadcaster.

To contact the reporter on this story: Serge-David Zoueme in Cotonou at [email protected]