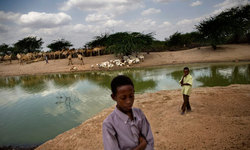 Gamba Manyatta village is empty now, weeds already roping around the few skeletal hut frames still standing. The people who were evicted took as much of their building materials as they could carry to start again and the land where their homes stood is now ploughed up.

Mohamed Abdi, 13, points out where his hut used to be. His was the last of the 427 families to leave. "They told us we would be burned out if we didn't go," he said. "They drove machinery round and round the village all day and all night to drive people out. No one understood why, as the village had been there for more than 25 years."

The eviction of the villagers to make way for a sugar cane plantation is part of a wider land grab going on in Kenya's Tana Delta that is not only pushing people off plots they have farmed for generations, stealing their water resources and raising tribal tensions that many fear will escalate into war, but also destroying a unique wetland habitat that is home to hundreds of rare and spectacular birds.

The irony is that most of the land is being taken for allegedly environmental reasons – to allow private companies to grow water-thirsty sugar cane and jatropha for the biofuels so much in demand in the west, where green legislation, designed to ease carbon dioxide emissions, is requiring they are mixed with petrol and diesel.

The delta, one of Kenya's last wildernesses and one of the most important bird habitats in Africa, is the flood plain of the Tana river, which flows 1,014km from Mount Kenya to the Indian Ocean.

Global warming and reduced rainfall has already hit the delta hard. "No proper research has been done into what wildlife is here, and now the habitat is disappearing there is no evidence of what we are losing," said Francis Kagema, of Nature Kenya, a conservation group supported by the RSPB in the UK.

Standing on the bank of a small lake that clearly was once much larger, he points out more than a dozen species of birds within view from his binoculars. "You don't need to be a scientist to see the situation here is critical and the land grab is terrible. This is supposed to be the wet season. The elephants have already gone, the hippos are going, birds are less and less."

The delta's people are trying to fight their own government over the huge blocks of land being turned over to companies including the Canadian company, Bedford Biofuels, which was this year granted a licence by the Kenyan environmental regulator for a 10,000-hectare jatropha "pilot" project. A UK-based firm, G4 Industries Ltd, has been awarded a licence for 28,000 hectares.

At the site where the former villagers from Gamba Manyatta were told to relocate, elder Bule Gedi Darso, 57, shows the foul-smelling stream that they have to draw their water from. "This is not a good place. Children have died, we have typhoid and malaria now. We were healthy before and our children went to school. This river is the drainage and pesticides from all the big farms. The proper river has been diverted to irrigate them and now we just get their poison. When we were evicted they showed us the maps, and we saw many more villages who don't yet know they are to be evicted too. Where will they all go?"

It is a question worrying another village. Didewaride was once surrounded by wetland, only accessible by boat. Now it is stranded amid miles of brown earth with occasional pools of water. Omar Bocha Kofonde, an elder, says: "The hippos have gone, the fish, the birds, and the soil is salty. The goats and cattle have no grazing. The rivers used to flush out the sea water, now the sea is coming up on to our land because there is no river. Everything is in danger. People thought they owned the land, we have been here for hundreds of years. Now we will fight; we are ready to die, for what else is there?"

It is the same view coming from villagers all around the delta, Christian and Muslim, farmers and herdsmen from the Pokomo, Orma, Luo and other tribes. The village of Ozi has just discovered that two huge plots of its land were sold at auction in April – they do not know who sold it or who bought it.

"This land ownership is giving us a headache. We know there are people who have sold our land when it isn't theirs to sell. They are criminals and we will fight them, with guns and with sticks," said Ali Saidi Kichei of Ozi village, which last month sent a delegation to the Kenyan capital, Nairobi, to demand a meeting with the Kenyan minister for lands. "We lived in paradise, in peace," he said. "Now what? No water, only salty water, land thieves and water thieves, and children with empty stomachs."

Kagema says Nature Kenya is trying to support villagers to go to court. "These people have lived here for hundreds of years, but suddenly someone writes up a piece of paper and they are squatters on their own land. The delta is of international importance, yet they control the water and drain the wetlands and portions are parcelled off to private investors like the biofuel companies. Homes and lands are given away from under them. Nobody cares because nothing happens immediately, but it is coming. Tana Delta is in chaos. When everyone picks up their share with their bits of paperwork … it will be war. The day is coming.