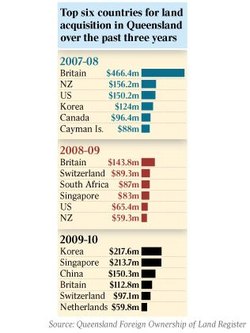 Data from Queensland -- the only state or territory to record the nationality of land purchasers -- reveals that foreign ownership of the state's land has almost tripled to 4.4 million hectares over the past seven years.

Foreigners now own 2.56 per cent of the state's land area, compared with less than 1 per cent in 2002-03, when the state government began publishing the results from its register. The data suggests that Korean, Singaporean and Chinese buyers have eclipsed traditional investment sources from the US and Britain.

Assistant Treasurer Bill Shorten said yesterday Julia Gillard had asked him to order an audit of land ownership in Australia, but the data would not be available until October.

Mr Shorten tried to douse demands to restrict the buy-up of farmland for mining, describing it as a "significant attack on states' rights".

The Prime Minister said this week she would "deliver on her agreement" with independent MP Tony Windsor to protect "sensitive" farmland from mining and coal-seam gas projects.

The Queensland government is already moving to declare some farming areas off-limits to miners, and the NSW government this week called on the federal government to review the foreign purchases of agricultural land.

The debate was ignited this week after The Australian revealed that the world's biggest coalminer -- the Chinese government-controlled Shenhua Watermark Coal -- had spent $213 million in the past two years buying 43 farms outside Gunnedah in NSW, where it plans to mine for coal.

The debate had been fuelled by the recent purchase of Victorian sheep farms by a Qatar government-backed buyer.

Former Queensland treasurer Keith De Lacy -- who was appointed to the board of China's biggest agribusiness, the state-sponsored COFCO last month -- defended foreign land ownership, pointing to the outcry over Japanese investment in tourism in the 1980s.

"Now, to a great degree, all the Japanese investors have gone but we still have all those great investments," he said. "They were never going to take their golf courses back to Japan."

Mr De Lacy, who is vice-chairman of COFCO, which is bidding to take over the Tully sugar mill, said there was "nothing sinister" in China's interest in Australian agriculture. He said the Chinese government was a "good shareholder".

The Queensland land ownership data does not distinguish between residential and commercial real estate, and agricultural, industrial or mining land.

British and American investors control half of Queensland's foreign-owned land, but Asian buyers have overtaken them as the most prolific buyers, snapping up land worth $581m in 2009-10.

The top spenders were Koreans -- who bought land worth $217m -- followed by Singaporeans' investment of $213m.

In Brisbane, the biggest investor was Singapore, which bought property worth $120m, followed by $94m Swiss investment and $38m from China.

In Cairns, Papua New Guinea was the biggest buyer, spending $17m in 2009-10, with $9m from British investors and nearly $7m from the Chinese.

The Japanese, traditionally dominant in the tourism sector, spent $16m on the Gold Coast and nearly $2m in Cairns.

The Chinese were by far the biggest land buyers in the Logan City Council area, which bridges Brisbane and the Gold Coast. They spent $54m last year -- more than 90 per cent of the total foreign investment in the satellite city.

The Japanese and Germans are the biggest landowners in Toowoomba, to Brisbane's west, but the Japanese have lost their dominance in Queensland, selling one-third of their landholdings in the past seven years.