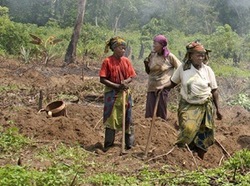 BRAZZAVILLE, 8 June 2011 (IRIN) - By handing over 80,000 hectares of untilled land to a few dozen South African farmers, authorities in the Republic of Congo are confident they will greatly improve domestic agricultural expertise and reduce the country's chronic dependence on food imports.

"In terms of nutrition, we are in a constant state of need," said Minister of Agriculture and Livestock Rigobert Maboundou. "This is why we are giving over these lands, to employ local labour and benefit from the South African expertise." He said it was essential to surrender the farmland to those who could invest in it.

"Congo has been waiting for an investment initiative like this, the creation of thousands of jobs. More than anything else, the country is expecting abundant food since the South African farmers will produce crops and raise livestock," said Minister of Land Affairs and Public Domain Pierre Mabiala.

The 40 farmers are leasing government-owned land for 30 years, with the provision to extend it for two terms. The farmlands include 63,000ha in Niari and 17,000ha in Bouenza, in the southwest.

There are 10 to 12 million hectares of land with agricultural potential in Congo, according to government data, but only 2 percent is farmed, mostly with rudimentary tools. "It's difficult to achieve food self-sufficiency like this," said Maboundou.

Wynand du Toit, vice-president of the Association of South African farmers who signed the deal, dismissed suggestions that it was really a covert land grab, with production aimed at the export market. "Our understanding with the government is that we are here to help the country's food production - we plan to set up an agricultural college and train local farmers," he said.

Du Toit said since not all of the land was arable, the farmers would receive about 1,000ha apiece. South African ambassador to the Congo, Genge Manelisi, said they would focus on raising livestock as well as rice and vegetables.

Congolese officials said the policy of granting land to investors was aimed not just at combating the food crisis, but also diversifying a national economy that was too dependent on oil, which contributes more than 80 percent of the state budget.

Land concession agreements have proliferated across Africa and elsewhere, leading to concerns that the promised benefits for locals - especially jobs - are never realized, while potential environmental and political damages are undersold. A 2011 World Bank report studied the increasing number of land deals from the past two years and concluded that "the risks are often large".

"Case studies demonstrate that even some of the profitable projects do not generate satisfactory local benefits, while, of course, none of the unprofitable or non-cooperational ones do."

Du Toit said the farmers viewed the acquisition as a business venture, and a way of diversifying investments. "When Pick 'n Pay [a South African retailer] opens a shop in Nigeria, no one raises an eyebrow, why so many questions about us?" He said the South African farmers were borrowing "millions of dollars" from international banks to fund the project. "We are making a big investment - we are taking in big pieces of machinery," he said.

The farmers hope to begin growing maize in January 2012. Although there are no official production estimates, they plan to produce 30,000MT between June and July 2012, and grow staples such as rice, cassava and vegetables.

The country relies heavily on imported food to feed its population. The Food and Agriculture Organization estimated that Congo spent 130 billion CFA (US$260 million) every year bringing in foodstuffs. In its 2010 report, the International Food Policy Research Institute (IFPRI) described food insecurity in Congo as "serious", with 11.8 percent of children underweight, and about one in five Congolese undernourished.

However, at the beginning of the 1990s, 40 percent of Congolese were undernourished, it said.

The government announced plans to become food self-sufficient by the year 2000 in the 1980s, remembered Joseph Moutanda Kassao, president of a cooperative of 320 growers based in Brazzaville. "We did not get any of the results we hoped for," he said.

The government announced in 2010 that it would invest 40 billion CFA ($80 million) a year for four years in the agricultural sector.

Congo has also been testing a policy of creating farming villages north of Brazzaville, with the input of Israeli technicians. Opened in October 2010, the "experimental" farming village of Nkouo, which is 83km from the capital and cost 13 billion CFA ($26 million), is able to produce two million kilogrammes of manioc.

Critics of the new land concession say bringing in foreign farmers is not the way to address food insecurity in the country. "We don't actually need operators or farmers from elsewhere to nourish us. We have a clear problem: our authorities do not assist our own farmers as they should," complained Dieudonné Mingui, head of the NGO Initiatives for Development and Progress. "Farmers right here don't lack initiative, they lack the means to develop large projects," he said.

Despite these sentiments, the project has not encountered resistance from local growers, who say they want to benefit from the experience of the South Africans.

"South Africa is the continent's economic powerhouse. Its agriculture is strong, and powerful," said Kassao. "If the South African farmers are really coming to produce and sell all the produce on the local market, it's a good thing. But if they're coming for their own interests, it will be a shame."

"I think the project is just getting started," said Kassao. "Let's wait and see."