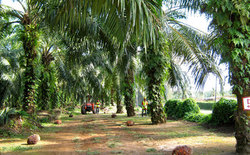 The chief executive of the world's largest producer of sustainable certified palm oil has revealed the company is actively seeking to acquire land in Cameroon as part of a MYR6bn (£1.2bn) investment programme designed to bolster the company's presence in western Africa.

Mohd Bakke Salleh, president and group chief executive of Malaysian conglomerate Sime Darby, told reporters in Kuala Lumpur earlier today that the group has identified 300,000 hectares (ha) of land in Cameroon that could be suitable for palm oil plantation.

He insisted no deals have yet been signed, but confirmed Sime Darby is in the process of meeting with village elders and community heads to discuss the potential for development. He added that the company hopes to finalise a deal "in the next few years", after which it would plant 5,000 ha in the first year, followed by a programme to plant tranches of between 10,000 to 15,000 ha annually.

"Cameroon is our second preferred choice after Liberia," he said. "We're looking at potential areas in Cameroon and the development formula is to work closely with the local communities [...] but nothing has been concluded yet. It's all just pure discussion at this stage."

A move into Cameroon would represent the next stage of Sime Darby's expansion into western Africa, following plans for a 63-year, 220,000-ha concession it owns in Liberia where planting is scheduled to start next month. Bakke revealed that the company is also considering plantations in Ghana.

The news is likely to raise fresh concerns amongst green groups that an expansion of Africa's palm oil industry could drive deforestation.

Sime Darby insists it does not locate palm oil plantations on virgin forest land and has strict environmental and social policies, which it hopes will set a benchmark for new companies seeking investment.

"Some of these African countries are actually calling us to come in and open up plantations because of our good track record and sustainability practices," said Franki Anthony Das, executive vice president of Sime Darby's plantation division.

Sime Darby claims to be the leader in sustainable palm oil, boasting operating practices which go beyond certification standards set by the voluntary certification body The Round Table on Sustainable Palm Oil (RSPO).

For example, Sime Darby is in the process of completing a detailed environmental impact assessment of the first 10,000-ha tranche in Liberia, where the first seed is slated to be planted by president Ellen Johnson Sirleaf in May. The company says it has strict policy to avoid developing peat land virgin forests. It also has a zero-burning replanting technique, uses integrated pest management to avoid pesticides, and composts empty fruit bunches to avoid methane produced by palm oil mill effluent.

In addition, the company says it is committed, through its MYR70m pledged investment in Liberia, to ensuring that small holders develop sustainable practices, particularly thorough the Small Holder Acceleration and REDD Plan (SHARP), which will see Sime Darby provide 22,000 landowners in Liberia with high-grade seeds, education and technical help.

The success of the programme will be measured by a range of NGOs and financial project partners including the UK's Department for Food, Environment and Rural Affairs, Conservation International, and the International Finance Corporation (IFC).

However, some environmental groups have argued that while palm oil plantations that adhere to sustainability standards are preferable to uncertified plantations, there are still risks that the expansion of the industry will have a knock-on effect on land use in neighbouring forested areas.

Sime Darby's move into Africa is part of the company's wider plans to aquire arable land outside of Asia in order to grow its market share, increase yields, and reduce transportation costs to Europe.

But despite the huge opportunities presented by its proposed African plantations, it remains to be seen if the company will be able to adapt to the risks posed to its plants by new pests and diseases, as well as the political instability of some western African states.