Way out west, another bubble is forming 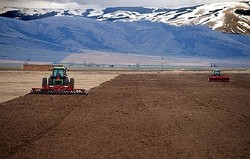 Through Great Western, NAB is in the middle of a hot US property market.

THE dusty back roads of Kansas seem a million kilometres from the housing frenzy that eventually caused the United States economy to come crashing down.

But regulators there are warning that a new real estate bubble may be forming across the US grain belt - and National Australia Bank is right in the middle.

A little over three years ago, NAB made a triumphant return to the US market, paying about $900 million for Great Western Bank, a tiny South Dakota lender.

Already Australia's biggest lender to farmers, NAB was looking to expand its agribusiness lending globally. And the market it strayed upon was just about to take off.

With prices for staples such as corn, wheat and stock feeds surging on increased global demand, crop land values in many mid-western states have soared more than 20 per cent over the past year.

This boom is drawing in outside investors, and local farmers, looking for a slice of the action, are also borrowing more, often using their property as collateral.

In March, the Federal Deposit Insurance Corp, the US bank regulator, called a meeting of risk management officers for mid-western banks. It was particularly keen to talk to those that specialise in agribusiness.

''Farmland has clearly been a preferred asset class in an era where other asset classes have stumbled as a result of the financial crisis,'' FDIC chairman Sheila Bair said in her opening remarks.

''While we don't see a credit problem in agriculture at this time, the steep rise in farmland prices we have seen in recent years creates the potential for agriculture credit problems sometime down the road.''

''History has taught us that it is nearly impossible to determine how much of the farmland boom may be an unsustainable bubble driven by financial markets,'' Federal Reserve Bank of Kansas City president Thomas Hoenig told a US Senate committee. Some mid-west properties are changing hands at nearly $US10,000 ($A9385) an acre with rises averaging 20 per cent over the past year, according to Federal Reserve Bank of Kansas figures.

When NAB moved in, Great Western was more a credit union than a bank. It featured local cake recipes on its internet page, sponsored local schools and entered floats in town fairs.

As a business, Great Western was flush with deposits and had a relatively clean lending book. Its customers were farmers, small businesses and home owners across Kansas, Colorado and Nebraska.

Small enough to fly under the radar during NAB's annual profit briefings, Great Western has been quietly chalking up growth. It generates a return on assets nearly double the US banking sector average and also outpaces average returns of Australian banks.

Since taking charge, NAB has used Great Western to snap up assets of several fallen banks across the US farm belt -- all at bargain prices. In the three years since NAB took charge, Great Western's branch network has nearly doubled to about 200 across seven states. At the same time, loans now stand at $US5.3 billion ($A4.98 billion) from $US2.6 billion when NAB took over. Profit from the bank has also been on the up. This year it is expected to top $US90 million from $US35 million when NAB moved in.

Lending to farmers and related businesses has increased to just over 17 per cent of Great Western's book, from a little over 10 per cent. Today, Great Western is the seventh-biggest agribusiness lender in the US.

NAB deputy chief executive Michael Ullmer, who is also Great Western chairman, said the US offshoot had been closely monitoring property values for the past two years. ''The price of farmland has held up and indeed continued to increase at a time when things like commercial property and residential real estate in some parts have been under intense pressure,'' he said.

''We've been alert to that from the very beginning and have been very cautious in the way we assess any lending against farmland."

But farming is notoriously volatile, and Federal Reserve Bank of Kansas branch executive Jason Henderson has stepped up his warnings that the good times for US farmers could quickly change.

He said history had repeatedly shown that agriculture was a "boom and bust industry''. If farm incomes started to shrink, crop land values could ''fall by as much as a third'' he cautioned.