Bangladesh to get 60,000 hectares for farming in Uganda 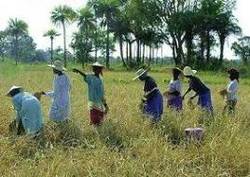 Uganda is interested to allocate up to 60,000 hectares of land to Bang-ladeshi entrepreneurs for commercial farming in the east African country, its Honorary Consul to Bangladesh said yesterday.

''The government of Uganda has shown interest to allocate more land for cultivation to Bangladeshi entrepreneurs. If it is feasible and receives attractive proposal it will provide more,'' said Abul Hossain, the honorary consul.

''Uganda will provide the land for free. It will however take a percentage of the produce," he said at a press conference at Ruposhi Bangla Hotel in Dhaka.

The disclosure came after a team of Bangladeshi businessmen got nod from the government of Uganda against their proposal for commercial farming on 10,000 hectares of land (1 hectare = 2.47 acres) in the country.

Nitol-Niloy Group, which led the delegation to the African country last month, organised the press meet to announce its plan to invest $12.5 million to grow rice on 10,000 hectares of land in Uganda in a bid to support Bangladesh's effort to ensure food sufficiency for its growing population.

With 16 crore population on 147,000 square kilometres of land, Bangladesh faces a gradual fall of arable land due to its increased use for non-farm purposes including housing.

The decline has created concerns about future food security for the nation which takes rice as staple.

Bangladesh requires additional 5 lakh tonnes of food grains every year for its rising population. Over the decades since independence, rice output tripled to over 3 crore tonnes in Bangladesh, yet the country has to depend on imports.

Ahmad, whose company's operations range from automobile to paper to cement, said the proposed farming venture on 10,000 hectares of land would give output of 77,000 tonnes of rice from two seasons a year.

''If such 22 projects could be done, we will have the food security the government wants,'' said Ahmad.

He said Bangladesh has a shortfall of 14 lakh tonnes of rice, and 22 such farms can narrow the gap between the demand and supply.

Hossain said the African country has a plenty of cultivable land, with suitable weather for farming. It also produces organic cotton, coffee, tea and rice.

He said the scope for Bangladeshi entrepreneurs to invest in the country would widen if the agriculture ministries of the two countries sign cooperation deal.

Apart from Nitol-Niloy Group, some more local entrepreneurs have also started looking for leasing land in other African countries including Tanzania.

Two local businesses including one led by Nitol-Niloy Group aim to go for farming in Uganda and Tanzania on 40,000 hectares of land, according to reports.

Ahmad expected the government would allow such investments to ensure food security in the country. He added an agreement between Bangladesh and Uganda might be signed next month.