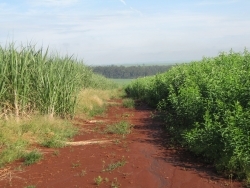 BUENOS AIRES, May 11, 2011 (IPS) - The governments of Argentina, Brazil and Uruguay are drafting laws to curb acquisition by foreigners of extensive tracts of their fertile agricultural land.

Despite slight differences between them, the proposed measures are generally fairly mild. None of these three member countries of the Southern Common Market (Mercosur) - the other member is Paraguay - proposes to ban land sales to private or public foreign capital, nor to regulate land use, nor to repossess land that has already been sold.

But they are attempting to set limits on further expansion of rural properties in the hands of companies or citizens belonging to foreign countries that regard them as an asset to supply food for their own markets, or as a speculative investment.

Brazil has already passed a law limiting the purchase of land by foreigners, and by Brazilian companies partly owned by foreign capital, while Argentina and Uruguay are studying similar bills.

Alarm has arisen over the increasing purchases of land in these countries in recent years, due to soaring international food prices and the lack of other safe options for financial investment.

A 2008 report by Grain, an international non-governmental organisation working on behalf of small rural food producers, had already warned about this trend and described concrete examples of its advance.

The study says Cambodia, which receives aid from the World Food Programme, has leased rice fields in Qatar and Kuwait, while Uganda has granted concessions on its wheat and maize fields to Egypt, and interested parties from Saudi Arabia and the United Arab Emirates are making approaches to the Philippines.

This flurry of land and food sales is not only about securing food supplies. Some land purchases in Ukraine, Senegal, Nigeria, Russia, Brazil and Paraguay, by banks and financial institutions, are of a speculative nature, the report says.

In an interview with IPS, Brazilian rural activist José Pedro Stédile, of the Landless Rural Workers' Movement (MST), said speculative capital is increasingly making inroads into agriculture in his country.

Land, ethanol production plants, and dams are among the assets that have drawn investment, he said. "The MST is concerned because this jeopardises national sovereignty and creates more food insecurity," he said.

The Brazilian Institute for Colonisation and Agrarian Reform (INCRA) said about 4.5 million hectares are owned by foreigners, but the government admits this figure is low and that the real area may be more than twice as large.

Stédile welcomed passage of the September 2010 law that restricts the amount of land that can be purchased or leased by foreigners, and limits the area of any one municipality that can be foreign-owned to 25 percent.

"Top priority in land use should be producing food for our people, but foreign companies buy land to speculate and to protect their assets, and they grow whatever is most profitable," he said.

Meanwhile in Argentina, the centre-left government of President Cristina Fernández sent a bill to Congress in April which limits land ownership by foreigners to 20 percent of the country's total area, and bans them from purchasing more than 1,000 hectares in productive agricultural areas.

However, neither Argentina nor Brazil proposes to limit foreign participation in investment funds, nor do they plan to repossess land that has already been sold.

The Argentine authorities estimate some seven million hectares of land are in foreign hands, but the National General Auditing Office puts the level of foreign ownership at 17 million hectares, equivalent to 10 percent of the national territory, and over half the planted area.

The Fernández government's bill views land as a non-renewable natural resource, and is based on an analysis of the global context of a growing world population and the steady degradation of available arable land.

The Argentine Agrarian Federation, which represents small and medium-scale farmers, has been asking for a law of this kind since 2002, and therefore welcomed the bill. However, it said a law on land leasing is also needed.

This law should establish criteria for what can be produced on land obtained under leasing arrangements, it said, because of controversies like one that flared up in Río Negro, a province in Patagonia.

The provincial government of Rio Negro signed a cooperation agreement with a group of Chinese companies to lease 240,000 hectares for soybean production over the next 50 years, with an option for automatic renewal of the lease.

Argentine agronomist Walter Pengue, of the Landscape Ecology and Environment Group at the University of Buenos Aires, told IPS that if the proposed bill does not repossess land that has already changed hands, or regulate land use, it will be ineffective.

"The bill is all very well, but I'm concerned, because academics worldwide are discussing land availability, and forecasting that by 2020 there will only be 15 countries with productive land, one of which is Argentina," he said.

Pengue criticised the Río Negro government's lease agreement. "They're not selling the land, but they're leasing it to produce whatever the lessee wants, so the ecological footprint of other countries will remain forever on our land," he said.

In Uruguay, the leftwing government of President Tabaré Vázquez (2005-2010) was unable to pass a law to restrict transfer of land to foreign ownership, but the Frente Amplio (Broad Front) coalition plans to approve it this year, now that it has a parliamentary majority during its second administration under President José Mujica, who took office in 2010.

The 2000 census indicated 17 percent of Uruguay's land is owned by foreign capital, geographer Marcel Ashkar of the University of the Republic's Faculty of Sciences told IPS. But by now it is estimated that between 20 and 30 percent of arable land is foreign-owned.

The Ministry of Livestock, Agriculture and Fisheries reported that between 2000 and 2009, six million hectares changed hands, and over half this land was bought by foreigners, mostly Argentines and Brazilians.

Soybean, rice and forestry plantations are attracting capital, not only from Uruguay's two large neighbours, but also from Spain, Chile and Finland, which have built enormous pulp and paper mills in Uruguay, enlarging their investments in the country.

* With additional reporting from Fabiana Frayssinet in Rio de Janeiro and Raúl Pierri in Montevideo.