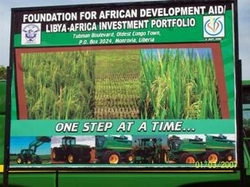 The African Development Aid project was established by the Libyan-Africa Investment Portfolio, owned by Libya's sovereign wealth fund. In 2008, the Government of Liberia and ADA Commercial finalized and signed a Concession Agreement, which was ratified by the National Legislature on June 11, 2008. The agreement gave ADA a land concession of 15,000 hectares for a period of 20 years, with another 3.000 hectares for out-grower facilities.


Monrovia - The African Development Aid (ADA) project funded by now embattled Libyan leader, Col. Muammar Kadhafi with some US$30m to engage in mechanized production of rice in Foya District, Lofa County, has collapsed, and President Ellen Johnson-Sirleaf is presently seeking a new investor to take over the project.

Employees of ADA complained to President Sirleaf during her visit to Foya last weekend, saying the company owes them several months in salary arrears.

The employees expressed their grievances to the President during a town hall meeting in Foya, saying the inability of the company to pay their salary arrears is causing disenchantment especially amongst youthful workers, some of whom are threatening to enforce their grievances through protest.

President Sirleaf responded by acknowledged that the ADA investment has now become a failure due to the ongoing crisis in Libya.

In a comment on the Voinjama Community radio, President lamented over the collapse of the project, saying her government heavily relied on it (ADA) to employ jobless citizens of Lofa County, especially ex-fighters.

"Concerning that Libyan project, we have some trouble. We need to find some other investor to replace it," the president told Lofa citizens.

"The government is now seeking another company to replace ADA and revive the project, she added.