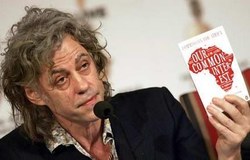 "Richer countries that are investing in land abroad for food cultivation, such as in Africa, should therefore also work to educate the poor about agricultural methods, so that food production can be increased to a level at which poor people can produce enough for investing countries as well as themselves,” said Bob Geldof at the Gulf Intelligence Food Security Forum in Abu Dhabi.

Abu Dhabi Despite the attention being paid to the worldwide food crisis, the current global structure is still not doing enough to help the more than a billion children who go to bed hungry every night, delegates said at a food security forum in the capital yesterday.

Countries such as the UAE that control vital natural resources like oil should, therefore, must take a stand and put pressure on other nations to ensure food security for all, Sir Bob Geldof, singer, musician, philanthropist and social activist said at the Gulf Intelligence Food Security Forum in Abu Dhabi.

“Without a change in the current food production and supply structure, food wars and mass starvation are imminent. Since countries like the UAE depend entirely on food imports to feed their populations, they should take the lead in pushing for greater, more efficient production of and distribution of food,” Geldof said.

According to statistics presented at the conference, the number of people suffering from chronic hunger surpassed one billion for the first time last year. At the same time, food prices hit a new high in February 2011, surpassing the previous peak prices of December 2010.

At current rates of population growth, it has been estimated that the world will have to feed 1.8 billion more people by 2030, which will require a 50 per cent increase in global food supply. By 2050, the world population is expected to reach nine billion, and food production will have to be increased by 70 per cent from current levels.

The only way to deal with this strife is to stem overpopulation, and to ensure that poor farmers and inhabitants in nations with plenty of available arable land are taught to cultivate and farm the land efficiently, Geldof said at the forum.

“We have a situation where rich countries subsidise their own farmers to produce crops inefficiently at high cost, whereas the poor in many African nations go to sleep hungry every night. Richer countries that are investing in land abroad for food cultivation, such as in Africa, should therefore also work to educate the poor about agricultural methods, so that food production can be increased to a level at which poor people can produce enough for investing countries as well as themselves,” he said.

The UAE, which purchased land in Sudan for agricultural purposes, should therefore ensure that this investment benefits poorer people in Sudan as well, Geldof added.
Educating women

He also stressed on the education of women as the only smart way of curtailing population growth.

“Technological fixes and new agricultural methods that help man produce more food will not be sufficient if the world population continues to grow at its current rate. We need to educate women, because history has shown that educated women prefer to have fewer children,” the activist and musician responsible for the renowned Live Aid and Live 8 concerts, said.

He also urged developed nations to pursue a multilateral approach in solving world hunger while avoiding strategies that only benefited their own populations.

tonnes of grain imported by the UAE in 2009

9 billion people in the world

10% decline in agriculture by 1 degree rise in global temperature