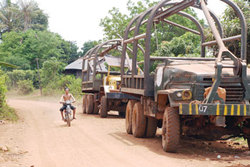 SOCFIN trucks in Cambodia, where the Luxembourg-based company, owned by the Rivaud and Bolloré Groups, is also active.

A lease agreement for the establishment of over 16,000 acres of an oil palm project alongside component investments was on Saturday March 5th 2011 signed at Sahn, the chiefdom headquarter, between Malen Chiefdom in the Pujehun District and Socfin Agricultural Company Sierra Leone Limited under the watchful eyes of the Minister of Agriculture and Food Security Dr. Sam Sesay.

The long awaited Agreement comes amidst various speculations much of which are now being put to rest following a day-long open engagement of all the parties involved in what has largely been described as a dream come true for the war torn people of Malen to once more bounce back to full time development activities as was the case when the then SLPMB was in operations.

Speaking at the ceremony, the General Manager of Socfin, Gerben Haringsma assured the Government of Sierra Leone and the people of Malen Chiefdom that the Company would live up to their corporate social responsibilities including the construction of a resident hospital, network of roads, schools, housing facilities, job opportunities for 10,000 people with special preference given to natives of the chiefdom.

Speaking further the General Manager disclosed said the investment in question involved the staggering sum of $ 100 million and that the lease was for 40 years. He also said that the second phase of the project would include the establishment of a rubber plantation and that full payment would be made for existing plantations in the areas of operations to be followed by an annual payment of lease rents to land owners.

Minister of Agriculture and Food Security, Dr, Sam Sesay explained the MOU entered into with the Socfin Agricultural Company and elaborated on the agreement signed between the people and the company noting that Government was very open about the arrangements put in place.

He encouraged the people to honour their own side of the bargain as Government would monitor each and every aspect of the project.

Resident Minister South, Moijue Kaikai spoke of Government’s monitoring mechanism put in place for the success of the project poised to help rebuild the lives of the people of Malen and the rest of Pujehun District.

Earlier in his welcome address, Hon. Paramount Chief BVS Kebbie promised the company of the fullest support of the people of Malen as the initiative was meant to bring about the felt needs of development activities to the war-torn chiefdom as was the case during the heyday of his late father who he said helped establish the SLPMB which succeeded in bringing about huge development into the Chiefdom.