Felda in talks to buy 90,000ha land to grow rubber and oil palm 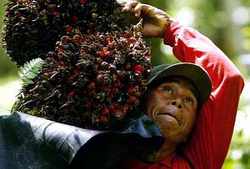 KUALA LUMPUR: Felda Holdings, the world's largest estate owner, is in talks to buy up to 90,000ha of land across South-East Asia to tap into growing global demand for rubber and palm oil, and boost profits, its top official said yesterday.

Managing director Sabri Ahmad said Felda Holdings, which managed estates under the Federal Reserve Land Authority, was approached to plant oil palm in Africa but might hold back as the political scenario needed to be studied.

“There are people asking us to invest in Africa but we want to take the step of providing management, knowledge and planting material first because a lot of the big boys are rushing in,” Sabri told Reuters ahead of the Bursa Palm Oil Conference next week.

“We are looking closer to Malaysia and Indonesia for palm oil, and Cambodia and Myanmar for rubber,” he said.

Sabri's comments contrast with the moves of big planters such as Singapore-listed Wilmar and Golden Agri Resources as well as Malaysia's Sime Darby that are rushing to take up land in the west African region.

Felda is the world's largest estate owner and manager, with 880,000 ha of land. Reuters