Land moves up the political agenda 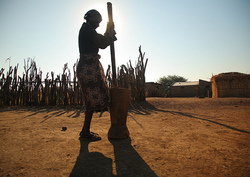 Published by CIP and AWEPA

Land has moved higher up the political agenda, with interventions by the President, Council of Ministers, communities, and donors. There has been an unofficial halt to new large land grants.

Two events in the next weeks show the new importance given to land.

Tomorrow,  Wednesday (23 February), civil society will make a presentation on sustainable land management to the research office in the Presidency. This is at the invitation of President Armando Guebuza, following a meeting with civil society on 3 November in which land was raised. That meeting was at the request of civil society, following the 1-3 September demonstrations in Maputo.

And the new Land Consultative Forum, which has been pushed for by donors, was created by the Council of Ministers in October and is now being established. It should meet for the first time in March. In setting up the Forum, the Council of Ministers said that “the food crisis and the search for land for other, non-traditional uses such as biofuels, forests, and nature reserves is putting more pressure on land and other natural resources.”

The World Bank used a meeting on 9 February to openly challenge Mozambique’s policy of encouraging large plantations by foreign investors and instead pushed for more support for Mozambican farmers. This reflects a radical and recent change in Bank thinking.

This follows three recent actions by the Council of Ministers. The delimitation of community lands was resumed late last year, after being halted for two years. In January land taxes were raised by 150%. The tax on normal farmland rises from Mt 15 (US$ 0.48) per hectare per year to Mt 37.50 ($1.19), and for grazing land and permanent crops from Mt 2 ($0.06 – 6 US cents) to ($0.16) per ha. And government recently contracted a consultant to do a major mapping exercise to try to identify land available for investors.

There have been no land concessions of over 1000 ha since the beginning of 2010, and there is a new more cautious attitude, with more detailed analysis of proposals.

Land conflicts in Lioma, Gurué district, Zambezia, bring together all the hot issues and main players. On one side are small commercial farmers backed by both the government’s district development fund (‘7 million”) and the Gates foundation. On the other is a foreign investor which has been given a large tract of land; the investor has limited financial resources but seems to have political backing, and evicted successful local farmers in December 2010

Lioma was a colonial settlement area (colonato) which became a state farm after independence and then was abandoned in the 1980s during the war. After the war, peasants as well as former state farm workers began to clear the thick bush from what is excellent farmland.

Seven years ago, with money from a Norwegian farmers cooperative, Clusa (Cooperative League of the USA) introduced soya beans into the area, initially with the idea of exporting to Norway, with technical support from TechnoServe, and also promoted the formation of farmer associations. The project  was highly successful with more than 5000 producers across Gurué district, one-third of whom are women, in 112 association. (But they never exported to Norway, because the demand for soya from local chicken producers was so great.)

Then in December 2009 the Council of Ministers awarded 10,000 hectares of the old state farm to a Portuguese company, Quifel, to plant soya as well as sunflower for biodiesel. The land given to Quifel included 490 ha occupied by 244 farmers, who assumed they had a right to be their as they had occupied the land for more than 10 years, and had been encouraged to clear and use the old state farm land by local officials and Frelimo leaders.

Quifel held two local meetings on a single day, involving about 550 of the 15,000 people in the area. It made extravagant promises of jobs as well as ploughing and clearing 2500 ha for an out-grower scheme. In the state farm era, Frelimo had wanted to turn peasants into workers, and in Lioma they  succeeded – former tractor drivers and other skilled workers backed Quifel because of the promise of jobs; they signed a memorandum of a “community consultation” that day which said they accepted the project. The soya farmers did not, but their views and land holdings seem to have been ignored.

Quefel’s proposal to the government which resulted in the land allocation is secret, but is said to promise 600 jobs by the third year, as well as a school, health post, water and electricity.

Meanwhile the Clusa soya project continued and support increased. More than 300 ha has been ploughed by the Clusa project in each of the last three years and more by private farmers. There are now six tractors, three purchased with loans from the district development fund (“7 million”, OIIL, Orçamento de Investimentos de Iniciativas Locais) and three leased from the provincial agriculture department. Production has risen from an average of 500 kg of soya bean per hectare to 1040 kg, with some farmers gaining nearly 2000 kg – probably the maximum possible yield in the area. In the larger Clusa project in 2009-10, 4500 farmers produced 4600 tonnes and sold it for $1.4 million. In September 2010 the Bill & Melinda Gates Foundation began backing the programme.

For the 2010 season, with Clusa support, farmers began ploughing in September because there is short window in December to plant soya. Then suddenly in December 2010 Quifel rushed to plough 500 ha before a visit by the governor. This was all land which had been cleared in previous years by the Clusa project, and included 40 ha which had earlier in the year been ploughed by local people. One woman had already planted maize; the photo on the previous page shows her standing in her field with the Quifel bulldozer in the background on 10 December.

Most of the 500 ha is now covered in tall grass. Quifel planted 50 ha of soya and has now planted 40 ha of sunflower, and may plant more before the end of February. Few jobs have been created, so far.

Lioma is a large and fertile area that stretches beyond the former state farm. Because of the war, some areas have not been used for 25 years, and there seems to be land for both smaller farmers and larger investors. Indeed, several investors have been given 1000 ha and have cleared new land and started farming, and did negotiate with local communities to avoid existing farms. But in January a local community rejected a proposal from an investor for 600 ha, largely because of bad past experiences with outside investors.

So far, Quifel does not seem to have the money to farm 10,000 ha, and it even invited Clusa to invest in the project.

There is concern about what happens next. Quifel had asked for 23,000 ha, taking a large part of the old state farm. About 1000 farmers in the soya project are on old state farm land, but probably outside the initial Quifel area (they cannot be sure as Quifel did not do a formal demarcation within a year, as required). Will that land also be given to Quifel or other outside investors?

But the land conflict also points to a conflict of development models – between an internationally recognised success of smaller commercial farmers on one side and a very large plantation run by a foreign investor on the other.

Some areas have better soils and water and traditionally attracted local people – who were often evicted for Portuguese settlers, and those colonatos often became state farms. Thus former state farms have some of the best land and more conflicts. The law is also unclear.

Meanwhile, the land law regulations (Decreto nº 66/98, art 10)  say that individuals who occupy land “in good faith” for 10 years have the permanent right to remain. This was intended by the drafters of the law specifically to grant “squatters rights” and cover occupation of state farm land and other post-war settlements. But some in government now say, whatever was intended, occupying a state farm cannot be in “good faith” because occupiers knew the land belonged to the state farm. Furthermore, the regulations also exempt “areas legally reserved for any purpose”, and some say a former state farm is such as reserved area.

In Nant, Maganja da Costa, Zambezia, there has been a dispute over a prime rice growing area for more than a decade. In 2005 an association applied to buy the state farm, but this was not accepted and the government has also been unwilling to agree a delimitation of land occupied by associations which includes the irrigated areas. In 2006 the irrigation system and infrastructure, but apparently not the land, was given to the Zambeze Valley Development Office (GPZ, Gabinete do Plano de Desenvolvimento da Região de Zambeze), itself since abolished.