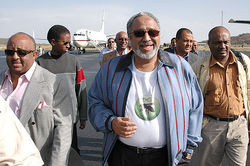 “Land grabbing poses no harm on the environment or on the local community,” says Saudi billionaire Sheik Mohammed Hussein Al-Amoudi.

A Saudi Arabian investor has broken the culture of silence surrounding a widely criticized farmland acquisition by foreign investors in Ethiopia, which had hitherto been met with considerable silence. The investor’s comments come as his company, Saudi Star Agriculture Development Plc, awaits a decision from the Ethiopian Agriculture Ministry to expand his farmland from 10,000 hectares to 250,000 hectares.

Accusations of massive "land grabbing" activities have attracted little or no response from government and investors alike, as a cross section of the Ethiopian population questions the government’s decision to lease large strips of arable land to foreign entities. While some of the lands include forest areas, many small local farmers have also been removed from their lands to make way for foreign investors.

But the silence over the land issue was recently broken when Sheik Mohammed Hussein Al-Amoudi — an Ethiopian born Saudi billionaire — commented on the seemingly relentless criticisms against the extensive land acquisition by foreign entities. “Land grabbing poses no harm on the environment or on the local community,” the billionaire said on February 10, while visiting his commercial farm in Gambela Regional State. A State that "has become the land grabbing hub in Ethiopia", says an Ethiopian national who spoke on condition of anonymity.

"It is a baseless accusation and in fact it is a rumor spread without observing and analyzing the actual investment scenario" argues Sheik Mohammed Hussein Al-Amoudi, one of the forerunners of commercial farming in Ethiopia. The billionaire owns Saudi Star Agriculture Development Plc, which is seeking to produce and export grains to Saudi Arabia. The company, managed by Haile Assegede, a former Ethiopian minister of Trade and Industry, is currently growing rice on 10,000 hectares of land in the Gambela region under a 450 million dollar investment program.

In the rare declaration, Al-Amoudi also asserted that his company as well as others involved in similar commercial farming activities will not adversely affect the local people but rather bring them many advantages by virtue of the huge investments. The Saudi billionaire owns various investments in Ethiopia, including the leather industry, gold extraction, animal husbandry and transportation, among others.

In 2008, Meles Zenawi, the Horn of Africa country’s Prime Minister, had said that he was "very eager" to provide hundreds of thousands of arable land to Middle Eastern countries for investment. A plan that perfectly illustrates Saudi Star’s ambitious plans, an agro-economist, who spoke on condition of anonymity, indicated. According to the expert, the government’s subsistence farming policy was shelved to give way to commercial farming as the best way to deal with food insecurity and become more self sufficient. Nonetheless, criticisms against the newly introduced government farming policy have been relentless.

Noting that although prioritizing foreign investments while allowing massive exports of essential food crops "is a meaningful concern" that has to be dealt with under the new agriculture policy, the expert does not believe that the government policy was designed to be "inconsiderate” as far as local populations are concerned. Like Al-Amudi, he argues that "the first phase of rice production, on 10,000 hectares of land, will create 15,000 jobs for the local people”.

And after evaluating Saudi Star’s demand to expand its investment to cover 250, 000 hectares of land, the Agriculture Ministry is expected to issue a new agreement which will bind the former to export only 60 per cent of its production. An agreement Sheik Mohammed Hussein Al-Amoudi of Saudi Star believes will benefit Ethiopia in terms of foreign currency, job creation and increased domestic food production.