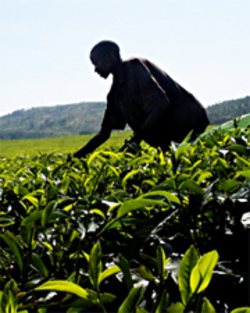 WASHINGTON— At least three major demands: “catalytic funding”, some form of “patient capital” and the setting up of “agricultural growth corridors” (farm estates established to benefit from major infrastructure projects) – need to be met in order to boost the productivity of Africa’s farm sector, creating jobs, improving livelihoods and alleviating poverty.

This is one of the conclusions reached last week by experts meeting at the World Bank in Washington, DC, to discuss how best to assist African smallholder farmers to transition from subsistence to commercial farming.

An essential first step, the experts agreed, must consist of helping smallholder farmers gain access to credit, farm inputs and protection for their land rights. A similar step is needed for African commercial farmers, who need access to grants, subsidized or long-term funding.

“ About 60 percent of the world’s uncultivated farmland is in Africa, yet the continent receives only five percent of global investments in agriculture, ” noted World Bank Managing Director Ngozi Okonjo-Iweala, pointing to the tremendous window of opportunity agriculture represents for Africa.

The representatives of African commercial farmers told the meeting that every dollar in “catalytic funding” (subsidized loans) devoted to Africa leverages up to $20 in private capital.

World Bank President Robert Zoellick, who hosted the talks, pledged Bank support in helping establish a “catalytic fund” and mobilize “patient capital” (resources from foundations and Trust Funds) to help nurse Africa’s “baby agricultural industry” to the maturity needed for it to satisfy demand from global retail giants like Walmart and Shoprite.

“ Only one percent of commercial lending in Africa went to agriculture in 2010, not enough to ensure that the sector expands by at least 5 percent a year, ” commercial bank executives and some of the region’s biggest agri-business representatives acknowledged.

A mere third of the $3bn devoted to agriculture by private investors worldwide goes to Africa, where 60 percent of all arable land continues to lie fallow.

These problems are compounded by limited use of science – agronomic research, genetically modified seeds, fertilizers and other inputs. In addition, about 40 to 50 percent of Africa’s total farm yield is believed to be destroyed or lost between the harvest, warehousing, conservation, post-harvest marketing and transport to the final consumer.

The representatives of the US-based retail giant, Walmart, and the South Africa-based retailer Shoprite and beer maker SAB Miller, spoke exciting about their belief in the African small farmer.

“ The global financial crisis of two years ago proved that the market will not always function as it is set up to, and some of us retailers must preempt that by working more directly with the farmer to sustain supply, ” said the representative of Walmart, whose foundation has set aside $1 billion to invest in agriculture n Africa.

“ Partnership is vital ,” said the representative of SAB Miller. The firms recent successes include a deal with the government of Uganda to pay a “zero tax rate” while launching a local beer. It also convinced predominantly Muslim Sudan to let it set up a $50 million beer brewery – the country’s first – which has created 300 full time jobs in production and thousands more in distribution and retail.

However, with leaders of some of Africa’s biggest commercial banks - EcoBank and Standard Chartered – confessing during the talks that their banks are ill-equipped to fund the sector, representatives of large scale farmers in attendance – Cargill, Zambeef, Tilda Rice – argued that this clears the way for the World Bank to step in as the lender of last resort.

Instead, they complained, Bank funding has been hard to access. Their frustration targeted the World Bank’s private sector arm (IFC), accusing it of being a prisoner to procedure, bureaucracy, and Bank policy guidelines. Even less amicable, one of them accused IFC of applying its own rules arbitrarily.

“ If you get three independent consultants to read IFC guidelines, you get three different interpretations, ” one of them lamented, forcing President Zoellick to offer immediate help in addressing any issues of unnecessary red tape or cumbersome procedures, if more precise information could be provided.

President Zoellick suggested the need to put together “ an all-inclusive financial package, which combines weather insurance, the protection of land rights and could use these as collateral to help farmers access credit.” He also encouraged practitioners to identify a few of the many successful pilot projects they have implemented so these could be replicated or ramped up, instead of endlessly experimenting and delay the transformational change Africa’s agriculture yearns for.

Some of the most successful pilots discussed Friday include the Tilda Rice Project in Uganda. Its main success, according to Tilda officials, is that it turned rice from a food into a cash crop; combining mechanized and labor-intensive approaches to farming; moving the growth of rice from a seasonal to a year-round planting and harvesting activity and raising yields per hectare by up to 240 percent.

In the six years since 2005, rice grown at the project has helped Uganda save $200 million it would have spent on rice imports; has satisfied domestic demand for rice; and is beginning to build reserves that could serve an export market.

SAB Miller’s Eagle beer in Uganda is brewed entirely from locally-sourced inputs from farmers. The beer project could potentially benefit as many as 15,000 farmers. SAB Miller’s efforts in Tanzania to source 50 percent of barley from local farmers by 2020, up from 10 percent in 2011, could benefit 35,000 farmers.

Founded on the principle of Agricultural Growth Corridors officials from the Yara Project in Tanzania said an agricultural investment blueprint had been finalized. It will be showcased by the Tanzanian government during one of the sessions at the World Economic Forum at Davos.

Public-Private Partnerships, including in agriculture, are an ideal model for Africa going forward. Success will come if African governments and donors worry less about the public dollar finding its way into the private bottom line. Private farms which provide jobs, help raise farmers’ incomes, improve livelihoods in rural communities as well as provide health, education and housing services to rural dwellers are, all said and done, rendering a public service. They should be able to benefit from public funding, participants argued.