La Via Campesina at the World Social Forum in Dakar 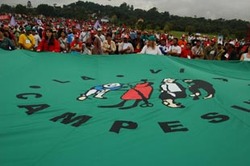 (Jakarta, January 28, 2011) The international peasant's movement La Via Campesina will join the World Social Forum in Dakar, Senegal from February 6 to 11. More than 70 farmers’ representatives from Africa, Asia, Europe and the Americas will take part in this forum, a place where social movements and civil organizations are going to debate alternatives for a better world, pursuing their thinking, formulating proposals and sharing their experiences.

At a time of rising food prices and upcoming food crisis, La Via Campesina will defend Food Sovereignty as the solution to the food and climate crises.

La Via Campesina will join the caravan organised by the social movements from Lomé (Togo) to Dakar (Senegal). The Caravan will depart on 23 January and is expected to arrive in Dakar on 5 January, to participate at the opening ceremony of the World Social Forum on 6 February.

During the World Social Forum, La Via Campesina will launch its campaign against violence towards women in Africa.

In the context of the WSF, the international farmers movement will also showcase African farmers’ food products and seeds at FIARA, a dynamic place for the integration of African people through local markets and exchange, as well as debates on issues challenging peasants’ lives in Africa. With its allies, La Via Campesina will organize a debate at FIARA on “Land grab in the context of food and climate crises - the need for land policies that protect peasant production for local markets”. Land grabbing, as an integral part of the dominant corporate agribusiness model with large-scale industrial monoculture, is affecting peasants from Africa, Asia and the Americas.

For the first time, FIARA will also provide spaces for conferences and debates on food sovereignty.

The farmers' movement, with allies, will organise several debates, such as “Defending peasant seeds against genetically modified organisms, transnational companies such as Monsanto and initiatives such as AGRA” and “Food Sovereignty, violence against women and Climate Change”. It will also be actively involved in the debate on the preparation of the Social Movements’ mobilisations for the next UN Climate Conference in Durban, South Africa, in December 2011.

La Via Campesina will have a stand at the World Social Forum where printed information can be found. The stand will also be a meeting point with La Via Campesina's people.

Appointments with the media:

* 9 February (from 10 to 11 pm) – Via Campesina Press conference "Farmers’ expectations of the WSF" at LVC stand (venue to be confirmed).

* 5 February - Participation in a special day on migration island Gorée.
* 7 February (9am-12 midday) – Debate: "land grab in the context of food and climate crises - the need for land policies that protect peasant production for local markets" at FIARA.
* 8 February (12.30pm-3.30pm) - Debate: "defending peasant seeds against GMOs, transnationals like Monsanto and AGRA" at WSF.
* 9 February (12.30pm-3.30pm) - Debate on Food Sovereignty, violence against women, and climate Change at WSF
* 9 February (4pm-7pm) - Launch in Senegal and Africa of La Via Campesina’s campaign to stop violence against women peasants, at WSF.


Contacts for the media (to interview farmers’ representatives)