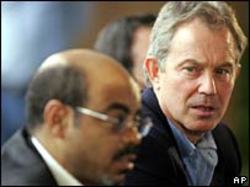 Mr. Meles Zenawi, the Prime Minister of Ethiopia, will make scheduled appearances at the World Economic Forum (WEF) in Davos, Switzerland, on Thursday, January 27, 2011. Here’s the Davos 2011 schedule. Davos is a ski-resort town in Switzerland.

Mr. Zenawi will participate at two panels focusing on land grabs in Africa and GDP growth in Africa, his two most favorite talking points.

This will be the first overseas trip of the Prime Minister since high inflation plunged Ethiopia into crisis as of late last year following the most recent controversial devaluation of the Birr, the local currency. Since late December 2010, when the Zenawi government fixed prices of some basic commodities to fend of the raging inflation, crisis has hit markets in Ethiopia.

Whether Zenawi will attend the scheduled meeting in the lavish Swiss ski-resort town of Davos, while millions in Ethiopia are struggling to afford basic necessities, remains to be seen next week.

Like the currency devaluation, Mr. Zenawi’s land policy has also come under fire in recent years. Millions of hectares of prime farmlands in Gambella, Benishangul and Oromia have already been given to foreign governments and corporate farmers.

While the Zenawi government says the foreign government-controlled and corporate-owned farms will bring mechanized farming practices to Ethiopia, critics say the facts are contrary to the government’s assertion on land grab. The former poor farmers, whose lands have been given away to the investors, simply become poor day-laborers at the new mega farms of the foreign governments and corporates in Gambella, Benishangul and Oromia.

The major objective of the foreign government-controlled and corporate-owned farms is to export food crops from the famine-ridden Ethiopia to their own countries, instead of selling them at domestic markets. While such a mechanism helps increase the GDP of Ethiopia due to the increase in exports, it does not help the local people, whose lives are also exposed to toxic pesticides, fertilizers and other chemicals used at the mega farms.

It is to be recalled that an Oromo conference on land grab, held in London in July 2010, denounced the land policy as a “greedy practice.”

“The so called win-win situation is most unlikely to be achievable due to the excess financial muscles of the so called investors who treat food just as yet another commodity and lack of participatory democracy especially in Ethiopia. Participants denounced land grabbing and agreed to co-ordinate their efforts globally to campaign to STOP the irresponsible greedy practice by the transnational conglomerates.” - Read about the conference here.

Regarding the GDP, the increase in GDP in Ethiopia is nothing but a scheme to transfer previously publicly-owned properties and farmlands, and the rich natural resources in Oromia and elsewhere in Ethiopia into the hands of the few, the well-connected corrupt TPLF junta members. Critics assert that, as the greedy and corrupt TPLF oligarchs transfer the resources into their hands, GDP counts up; and the poor gets poorer.

The “trickle down” approach has recently failed in Tunisia, where GDP growth had been taken by the former government as a major indicator of the development of Tunisia (watch video below by Al Jazeera and dated Dec. 26, 2010). As the ongoing Tunisian popular revolution shows, GDP growth is only an indicator of the increase in the wealth of the rich and the powerful, not related to people-centered development, which only comes when political solutions bring freedom and peace.

A Tunisian opposition leader on the following video says,

“These protests – they were organic; it’s a social burst against the failures of the government in place, which is claiming that it’s got more than 5% increase in GDP each year, and that it’s claiming it’s a paradise, but these solid development and these solid gains in terms of the economy, where are they?”