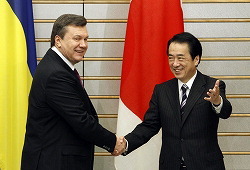 Under a joint statement issued after their talks at Kan’s office, the two noted that Ukraine has a "high potential for increasing agricultural production, grains in particular, which may positively contribute to the global balance of food supplies."

To help in Ukraine’s economic development, the two countries signed a deal for a loan from Japan worth up to 8 billion yen via the state-backed Japan Bank for International Cooperation.

Ukraine will offer a stable supply of farm products to Japan, according to the statement.

The two leaders also decided to launch this year negotiations with a view to concluding a bilateral treaty aimed at mutual promotion and protection of investments.

Yanukovych said his country has introduced corporate tax incentives for investments into specific sectors from this month and has a "special interest" in attracting Japanese investment in sectors such as coal mining and metallurgy, the statement read.

Beyond economic issues, Kan and Yanukovych underlined the need to cooperate in tackling climate change, with the latter confirming his government’s commitment "to ensure the appropriate and transparent management" of state funds received from Japan for selling carbon emissions quotas under the 1997 Kyoto Protocol on climate change.

The promise comes in the wake of Yanukovych’s recent revelations on diversion of such funds by the former Ukrainian government.

The two leaders also reaffirmed working together in nuclear disarmament and nonproliferation, while Yanukovych threw his support for Tokyo’s bid to become a permanent member of the U.N. Security Council, according to their joint statement.

Prior to the summit talks between Kan and Yanukovych, Japanese Foreign Minister Seiji Maehara and his Ukraine counterpart Kostyantyn Gryshchenko agreed to boost bilateral ties by holding a meeting of the Japan-Ukraine Cooperation Committee chaired by them later this year.

Maehara also showed eagerness to promote Japanese investment in the Ukraine farm sector to expand agricultural production in the country as part of Tokyo’s policy of securing food supply, according to the Foreign Ministry.

The remarks were made a day after Japanese Prime Minister Naoto Kan and visiting Ukrainian President Viktor Yanukovych agreed to launch negotiations on the investment treaty this year.

"Through the deal, cooperation (between the two countries) is expected to be promoted further in areas where our country can make use of its useful technologies, mainly in energy and environment fields, " Kaieda said during a Ukraine investment seminar in Tokyo.

"To create a new stage in bilateral economic ties, I would like to seek an early conclusion of the negotiations," the new Japanese economy, trade and industry minister added.

Yanukovych, who also attended the seminar, said through an interpreter that his country’s market has "great potential."

The bilateral investment treaty is aimed at increasing investor protection and creating an environment to encourage investment liberalization.