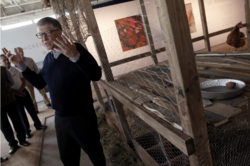 Billionaire philanthropist and Microsoft's co-founder Bill Gates speaks to the media, in front of a chicken coop set up on the 68th floor of the 4 World Trade Center tower in New York City. (Photo: Mike Segar / Reuters)
AgWeek | 9 June 202


Entity linked to billionaire Bill Gates pays $13.5 million for Campbell Farms' North Dakota farmland
By Mikkel Pates
GRAFTON, N.D. — An entity associated with Bill Gates, the billionaire co-founder of Microsoft, appears to have purchased about 2,100 acres of northern Red River Valley farmland in North Dakota in a deal quietly worked out with the owners of Campbell Farms, a potato farming group headquarted in Grafton, North Dakota, last November.
Nobody involved in the deal seems eager to talk about it.
Public deeds show the transaction totals about $13.5 million, with a rough average price in two counties of $6,400 per acre. Pembina County transfers break down to about $6,600 per acre. The Walsh County documents are complicated by river boundaries, but the sale price calculates to about $6,000.
The Pembina records show “grantors” (sellers) are brothers “William T. (‘’Bill") Campbell, a married individual, Gregory T. (‘Greg") Campbell, a married individual and Thomas S. ("Tom") Campbell, a single individual.” Agweek left phone messages, emails and texts for Tom and Greg and visited offices of Bill at Campbell Properties, Fargo, without a response.
The mostly non-irrigated land on Nov. 2 and 3, 2021, was transferred to Red River Trust, with trustee Peter Headley. The trust is located 8789 Penrose Lane, Suite, 400, Lenexa, Kansas, a suburb of Kansas City, Kansas. That’s the same address as Cottonwood Ag, or Cottonwood Farms, and Oak River Farms/Midwest. Agweek called Oak River Farms, which did not return the call.
Meanwhile, an entity called Red River Trust was filed with the North Dakota Secretary of State’s office on Feb. 15, 2022, with an address of 15111 Highway 17, Grafton, which is the address for Campbell Farms.
‘Farmer Bill’
A Wall Street Journal in 2015 said that in 1994, Bill and Melinda Gates hired Michael Larson, who operated through Cascade Investment LLC, to diversify the family portfolio away from Microsoft. Larson told the Wall Street Journal he acquired “100,000 acres of farmland” in many states. The “Land Report 100” newsletter later would estimate the investment is more than twice that amount, and would say he owns more farmland than anyone in America. Some of it was in Canada.
Cottonwood Ag Management is an agricultural asset management team for BMGI/Cascade Management, according to AgriInvestor.
Headley, in his LinkedIn profile, shows himself to be head of agriculture investment management for Investment Management Co., since April 2017. Headley previously was managing director of agricultural investments for MetLife at Overland Park, Kansas, from 2007 to 2017, and before that was regional director of Citigroup/Travelers for nearly 15 years.
In a 2020 article on farmland investment by NFU Mutual Charitable Trust, the authors said Headley headed “Cottonwood,” which they described as an ag-investment platform for Bill and Melinda Gates.
The article described an increased interest by “Ultra High Net Worth individuals in farmland ownership” and questioned whether this was good for small farmers. North Dakota has anti-corporate farming laws, but entities can legally form “limited-liability limited partnerships” in which corporate money is not involved.
Spud profile
Regardless of any land ownership status, Campbell Farms, on their website, appear to continue their potato farming, including on the land involved in the deal. The Campbells did not make themselves available to discuss the details of the sale, including whether there were lease-back arrangements.
According to their farm website, Bill and Tom started Campbell Farms in 1978 with a $9,000 loan. Greg joined two years later. According to their website , the farm has operations at Big Lake, Minnesota, west of Minneapolis, and Grafton, north and west of Grand Forks, North Dakota.
The company lists itself as a “fully-integrated, year-round supplier of fresh table stock potatoes.” They produce fresh red organic potatoes, as well as premium red and yellow potatoes. The website lists the three brothers as the executive team and Jerel Lindgren, farm manager, and Thomas Campbell II, as manager of the Big Lake farms.
Tom Campbell, 63, also is a former North Dakota legislator who has unsuccessfully sought statewide office, including abbreviated attempts at getting the Republican nomination for the seats now held by Sen. Kevin Cramer and Rep. Kelly Armstrong.
In his congressional efforts, Tom promoted himself as potato farmer, but his ads downplayed his former role as chairman of the board and shareholder of Choice Financial Bank. On Jan. 6, 2021, at the urging of conservative radio personality Scott Hennen, Tom flew to Washington, D.C., where he attended the infamous rally for then-Pres. Donald Trump, which turned into a Capitol break-in and insurrection.
Campbell later told Agweek he was not a strong supporter of Trump and did not think his trade policies were good for agriculture. Tom said he was in the air, flying back to North Dakota, before he learned the event had turned violent.