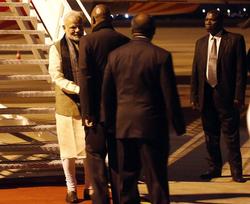 India will enter into a government-to-government pact with Mozambique to buy pulses from a network farmers, for export back to India, without taking control of their land. (AP)
Hindustan Times | 7 July 2016

India plans to take its cooperative farming model to Africa to control mounting prices of food, especially pulses, back home and bolster economic ties with the continent while avoiding the contentious issue of leasing land.

Under the cooperative model, India will identify a network of farmers with the help of local agents and help them with seeds and other improvements. These farmers will also be assured of New Delhi buying their product at a rate not less than the minimum support price of the same produce in India.

This policy, officials say, will help the country stay away from the politically sensitive issue of leasing land for farming, which often leaves countries such as China facing charges of land grab in a continent with bruising memories of centuries of colonial occupation.

The first phase of this policy will be inaugurated on July 7 when India enters into a government-to-government pact with Mozambique to import pulses during Prime Minister Narendra Modi’s visit.

India currently faces a shortage of 7.6 millions of tonnes of pulses, a staple source of protein for many and has been taking several import measures to meet the shortage. Some pulses have been selling at Rs 200 a kilogram in recent times, and rising food prices push up retail inflation too.

And looking at Africa for import is a viable option on many counts. Africa has almost 60% of the world’s uncultivated arable land. Agriculture cooperation will also help leverage economic ties between India and countries in the continent.
India believes replicating its cooperative model in farming is the best option available to ensure a steady supply of agriculture produce. What is being looked at with Mozambique can be expanded to other countries, say Indian official.

In the case of Mozambique, the plan is to step up the cooperation in phases. “Now we are looking at the import of 100,000 tonnes of pulses from Mozambique. But the idea is to grow the network of farmers”, said Amar Sinha, secretary of economic relations in the ministry of external affairs.

He said the leasing of land often assume political sensitivity. Land remains a sensitive issue in Africa, which was under the colonial rule for many years.

Officials said there are many African countries that India is looking at replicating what is planned in Mozambique. “There are many countries such Tanzania, Kenya, Malawi, where we can explore the idea of cooperative or contract farming. Ensuring food security is the primary responsibility of any government,” said a source.