Small farmers could buy "up to 20ha of state-owned land" 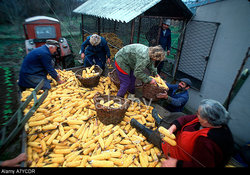 Small farmers cold buy "up to 20ha of state-owned land"

"For the first time in history, Serbia will offer the owners of small farms of up to 30 hectares to buy a part of the state-owned agricultural land."

Serbian Minister of Agriculture and Environmental Protection Snezana Bogosavljevic Boskovic made this statement on Friday.

The farmers will be able to buy up to 20 ha of farmland owned by the state and pay it within five years, the minister said at a public debate on the draft law on amendments to the law on agricultural land, held in Nis, noting that this is an attempt to provide additional support to small farmers.

The proposed changes refer to the land that has not been leased for at least three consecutive agricultural years, Bogosavljevic Boskovic specified, adding that the law will allow the possibility of a five-year free-of-charge lease, with the option of extending this period to twenty years.

The most important change introduced by the draft law are penalties for the usurpation of agricultural land, she pointed out.

Nearly a half of state-owned farms are not leased and large portions of this land are being usurped, the minister noted.

A large part of the arable area remains uncultivated, and the level of investment is extremely low, Bogosavljevic Boskovic stressed, adding that the law also intends to allow major investors to lease up to 30 percent of the state-owned farmland.