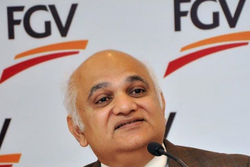 “They have their own schedule in terms of the process on the acquisition. We will follow what the advisors have scheduled for this bidding process,” said FGV group president and CEO Mohd Emir Mavani Abdullah yesterday after the company’s AGM.

The group is among at least four Malaysian plantation companies hoping to acquire Papua New Guinea (PNG)-based NBPOL, which has 77,000ha of oil palm plantations in PNG and the Solomon Islands, 12 palm oil mills and one refinery each in PNG and Liverpool.

NBPOL is also the largest sugar and beef producer in PNG through its over 7,700ha of sugar cane plantations and 9,200ha of grazing pastures as well as a seed production and palm breeding facility.

FGV said NBPOL would be a strategic addition to its portfolio as the soil there was fertile and suitable for oil palm planting.

“The yields in PNG are anytime better than in Malaysia. The yields can go up to as high as 26-27 tonnes per ha as it is situated on volcanic soil. And the oil extraction rate is also quite high as you can get 24% there,” FGV executive vice-president and head of global plantations Abdul Halim Ahmad said.

“This is provided you can solve the other issues (for entry). For NBPOL, it has been there for quite some time so it is stable and many issues are already behind them. If you go into greenfield, you have to deal with social, people and even the Roundtable on Sustainable Palm Oil matters,” Halim said.

He noted that this conclusion was based on a technical team survey on the country a few months ago.

Meanwhile, FGV said it would soon announce its plan to hive off certain non-core assets.

“We want to unlock the values here and maybe some of them (companies) will be divested – especially those which are not within our value chain. But the rubber business is a core business and we will not divest it,” Emir said.

On the outlook for palm oil prices, FGV said it would ultimately be decided by market forces and other related commodities such as crude oil.

“There will always be a correlation of these prices but our forecast prices are conservative, at RM2,450 per tonne for the year,” FGV chairman Tan Sri Mohd Isa Abdul Samad said.

The company also noted that yields due to the dry weather and the El-Nino phenomenon would impact more of its plantations in Peninsular Malaysia than in Sabah or Sarawak.