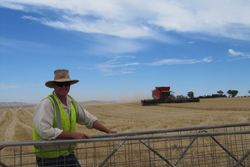 Rob Atkinson is the manager of Hassad's property at Canowindra in NSW and has worked for several foreign-owned companies during his career in agriculture. (Photo: Laurissa Smith)

Australia has 20 million hectares of land cropped to grain. It sounds like a lot, but on the world stage the industry is still a relatively small player.

Australia doesn't have a big domestic appetite for grains and so a large portion of what is produced is exported.

Qatar, in the Middle East doesn't have that luxury.

Oil rich but land poor, the nation imports 90 per cent of its food.

Hassad Foods, the agricultural arm of the Qatar Government was set up in 2008 to secure some of those supplies for its people.

With capital of $1billion it set about investing in agricultural businesses around the world, including Australia.

In November 2009 it established the company Hassad Australia and with $500 million to invest in agricultural businesses, the spending spree began.

It added grain to its portfolio of farms, snapping up properties at Warren, Trangie, Canowindra and Junee in central and southern NSW.

In 2012 Hassad Australia took on more farms, this time in Western Australia at Bindi Bindi, Jerramungup and Esperance.

In four years, the company has accumulated 255,000 hectares of agricultural land with the aim of producing 165,000 tonnes of grain and 100,000 lambs annually.

Mr McKeon says it's on its way to achieving its target.

"It will be delivered in part by increased productivity and improved yields."

In June this year, Qatar received its first shipment of barley from Australia.

Hassad Foods is building facilities in the country with the capacity to store 125,000 tonnes of grain for the food market and feed grain for up to 80,000 sheep.

But not all of the grain produced on its Australian farms is destined for the Middle East.

At its 8,500 hectare property Gindurra, near Canowindra, south west of Orange in the central west of New South Wales, 3,000 hectares is cropped with wheat and canola.

Manager Rob Atkinson says they've been producing just over 7,000 tonnes each year and the grain is warehoused locally at GrainCorp.

"It gets sold in the GrainCorp system and it's open to anyone to buy later in the year."

It's been three years since the company purchased eight farms near Canowindra and pulled them into one big property.

Kevin Walker, a councillor on the Cabonne Shire believes the negative opinions of the company, which emerged when they first took an interest in the area, are starting to dissipate.

"They've accepted them now," he says.

"There's been no hassles or problems and they employ locals so it's been good that way."

But he admits Hassad's big buy-up in the area might have contributed to a jump in land values.

"We're looking at a rate review at the moment with council and no doubt the land values in Canowindra have gone up.

"It's got to be partly due to what they're paying for the land.

"What the increase in rates will be I couldn't tell you, but they won't be going down, put it that way."

Wayne McKay runs a mixed farm at Billimari, halfway between Canowindra and Cowra.

He says views on land values will vary depending on where you sit in the property market.

"I think it's held land values, more in the surrounding areas where they're not buying land.

"For those people that want to sell land, it's been quite a fortunate situation.

"For those that have ambition to buy land it makes it more difficult."

"The opportunity may exist to purchase additional properties down the track to support the company's production goals.

"Australia has relied on foreign investment for over 200 years and will continue to do so.

"As corporate farmers we have a responsibility to take a leadership role in the areas of environment, health and safety and animal welfare."