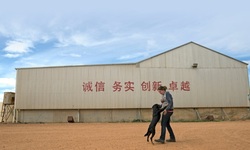 The writing is on the wall for anyone who doubts China's plans to invest billions of dollars for a big stake in WA agriculture.

And the message in Mandarin across the iconic corrugated iron shed is Reliance Pragmatism Innovation Excellence, as one of China's biggest state-owned conglomerates races through an historic first harvest near Lake King.

The Beidahuang Group is working around the clock to answer critics who said it would not grow enough grain to feed the chooks.

The attacks came after its Australian operating arm bought and leased 85,500ha of Wheatbelt farmland in a little over six months to begin operations in WA.

Farm manager Jimmy Hutchinson estimates they are averaging more than 2.5 tonnes a hectare for barley, more than 1t/ha for canola and more than 2t/ha for wheat on the 23,336ha Connemara property.

It will not match the performance of some surrounding farms in what has been a bumper season but Mr Hutchinson said it was a great result under the circumstances.

The property was covered in weeds eight months ago and had been left unfarmed for almost two years after companies associated with Dennis Joyce collapsed with debts of $70 million.

It has also flagged a move into livestock production within months. The properties are stocked with about 10,000 sheep and it is preparing to reactivate major sheep and cattle feedlots on two of the biggest farms.

The $200 million spending spree in WA since late last year includes $70 million on 34,500ha of farmland. It has spent $3 million on road trains and millions more on precision seeders, chaser bins and on-farm storage. The storage includes scores of silo bags, each loaded with up to 250 tonnes of grain.

The company is guarded about its plans to export the grain building up on its farms, with work yet to start on an initial $10 million upgrade of the Albany storage and ship loading facilities leased by Vicstock Grain.

In the meantime, it remains open to working with CBH.

BDH is opening up about its operations after revelations last year about its plans to create an integrated supply chain from WA to China drew a mixed response and its investments were investigated by the Foreign Investment Review Board.

Signs carrying its symbol - a giant green sun rising over paddocks - have started to appear on farm gates.

It has sought out State Government ministers for meetings and HFA director Xiucai Guo briefed local business leaders at a function supported by the Chamber of Commerce and Industry and the Department of Agriculture and Food WA.

One cloud on the horizon is a legal dispute with a local farmer over an alleged agreement to buy his property, but the reaction from local suppliers and contractors - including Elders, Summit Fertilizers, Great Southern Fuel Supplies and McIntosh and Son machinery dealers - has been overwhelmingly positive.

Mr Hutchinson admitted seasonal conditions had smiled on the first year of cropping, but said efficiencies created by the scale of operations and the hard work of his foreign legion of farm workers were other key factors.

His team is made up of Australians, Scots, Welsh, New Zealanders and a big French contingent, most gaining valuable experience while studying for degrees in agriculture.

They will finish the Connemara harvest over the next few days and then move on to farms near Ongerup.