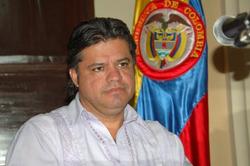 The threats came in on his mobile phone after denouncing land grabs in the province of Vichada.

In a interview with Caracol Radio, Arias said that he has been mentioned as responsible for the eventual loss of farmland by the sugar mills, and for that reason become the subject of an extermination plan.

"This is very serious, we are really worried. They want to get rid of us for reporting what they are doing. We hope the government will do something. I have a very weak security system that doesn't match the level of threats we are under," he added.

Together with Senator Jorge Robledo, Arias revealed the scandal of the improper acquisition of thousands of hectares of unused land in the Colombia plateau, which led to the resignation of Colombia's Ambassador to the United States, Carlos Urrutia, from his post.