Billionaires at play in the fields of the poor (part 5): Chinnakannan Sivasankaran 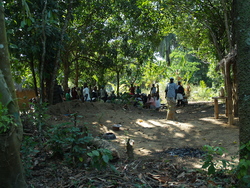 In Kpaka Chiefdom, Pujehun District in southern Sierra Leone, on another of Siva’s land leases, town chiefs, youth leaders and landowners hold meetings to complain bitterly that their Paramount Chief leased more than 19,000 hectares of their land. (Photo: Joan Baxter)


Billionaires at play in the fields of the poor (part 5): Chinnakannan Sivasankaran

There is a great deal of buzz about Africa’s economic awakening, with some countries experiencing double-digit growth in gross domestic product that is being driven by waves of foreign capital, as investors from Asia, Europe, North America, the Middle East and also Latin America descend on the continent. Many of the investors are after natural resources, mineral and oil riches and also farmland. This raises the question: is the foreign investment benefitting the continent or is it just another scramble for Africa, the last stage of colonialism? In this, the fifth in a series of six articles on the issue, Joan Baxter profiles another of five billionaire investors in Sierra Leone, Indian national Chinnakannan Sivasankaran and his quest to make his Siva Group into the largest player in the production of  palm oil by leasing land and establishing oil palm plantations from Papua New Guinea to Sierra Leone to South America.

The magnitude of the ambitions of other investors working to get their hands on Sierra Leonean real estate in the form of farmland pales next to those of the Siva Group. Siva is an Indian conglomerate with offices in Singapore, ”a big, dirty Asian tax haven”. [i] The Siva Group is working to become ”the largest global player in the production of sustainable palm oil”. [ii] According to its country representative in Sierra Leone, it is acquiring more than 200,000 hectares of arable land for oil palm plantations in the country,[iii] with agreements that will give Siva control of the land for 50 years with possible extensions up to 99. This is part of the Group’s quest to plant one million hectares of oil palm in Africa and Asia.[iv]

Atop the Siva Group is another reputed billionaire, the enigmatic Indian entrepreneur Chinnakannan Sivasankaran. [v] A former employee of the Group says that Sivasankaran does all he can to avoid appearing on the Forbes List. [vi] He is one of the largest landowners in The Seychelles,[vii] and the owner of three private jets. He was the first to join Dragon Blaze, an exclusive ultra-luxurious lifestyle company based in Malaysia, which gives its members, limited to a maximum of 50, the right to use their fleet of private jets and yachts.[viii]

The Siva Group is another complex tangle of companies that is almost impossible for the outsider to penetrate. Asked by the Sierra Leonean NGO Green Scenery for an organogram of the corporate structure of its companies operating in Sierra Leone, a Siva spokesperson provided the following cryptic list: “Geoffpalm > Biopalm > Biopalm Star Oil and Geoffpalm > SLA [Sierra Leone Agriculture], Luxemburg > SLA, Sierra Leone”.[ix] But, he added, Geoffpalm, the holding company of all Siva oil palm assets, is held by Broadcourt Investments Ltd, and “the Holding Company of Geoffpalm is a Siva Group Company”.

If educated readers versed in the ways of big business and modern finance are unable to make much sense of this baffling corporate labyrinth, it is difficult to imagine what it must be like for rural farming peoples in Sierra Leone. Many of the rural people being convinced by investors and their sweet-talking agents to sign away their lands have never set foot in school, never seen a bank let alone had a bank account. For them, land is still viewed as a communal good for the use and benefit of everyone.  Many losing access to farmland are women and youth that are not consulted because they are not “family heads” and may not be considered landowners.

According to Siva / Geoffpalm spokesperson Vinod Sharma, Siva acquired two large land leases by simply purchasing the two companies — Sierra Leone Agriculture and African Oil Palm — from a British national, Kevin Godlington, who had already acquired the land. Leases obtained from the Registrar General’s office in Freetown where leases are registered and interviews in chiefdoms show that between 2009 and 2012, Godlington was involved in at least six different companies that acquired seven or more different land leases covering about 275,000 or more hectares of arable land in Sierra Leone.[x] Sources in the country say that Siva paid Godlington US $ 5 million for Sierra Leone Agriculture (SL) Ltd, with its 41,582 hectares, and US $ 1.5 million for African Oil Palm, with its 39,321 hectares.

The Siva Group also acquired some of its land holdings in Sierra Leone by directly leasing the land from Paramount Chiefs and people the Chiefs designated as signatories on the leases. It did so with the assistance of the Sierra Leone Investment and Export Promotion Agency (SLIEPA). SLIEP has spearheaded the push for foreign investment in land and the ‘opportunities’ for oil palm and sugarcane plantations in the country with the assistance of the World Bank Group, which provided the consultants to identify lands suitable for sugar and oil palm. On two of the Siva land leases, those for the Kpaka and Galliness Peri Chiefdoms in Pujehun District, two SLIEPA officials signed as witnesses.

In the chiefdoms and communities affected by these leases, local people claim to have very little or even no knowledge and understanding of these leases, the companies behind them, or the plans to convert tens of thousands of hectares of farms and secondary forest into oil palm plantations.

In the Kpaka Chiefdom, where Siva’s Biopalm Energy has a lease for 19,724 hectares, there is now unrest as the Section and Town Chiefs as well as youth leadership are challenging the authority of their Paramount Chief who signed away their land.[xi] They allege that he did so without their knowledge or agreement and that he did not account to them on how he spent US$10,000 donated to the Chiefdom by Siva on the occasion of the 50th anniversary of Sierra Leone’s independence.

Paramount Chiefs are instrumental in the process of acquiring land, so the Siva Group representative in Sierra Leone says there is a plan to fly them to India to “get to know the company” better. For local people, such junkets for their Chiefs may be still more grounds to believe that their Paramount Chiefs are being accorded benefits from a very wealthy company, while they, the landowners and land-users stand to lose their land and livelihoods. This in turn will further increase the risk of social and political unrest on the lease areas. But the victims of any turmoil and the suffering that may ensue are likely to be those affected by the land deals, not the billionaire investors in distant capitals.

Any part of this article may be disseminated without permission, provided that it is attributed to Joan Baxter as author and a link to this website is given.