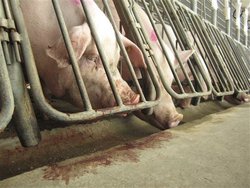 Pigs at a Smithfield farm in the US (Photo: AP).

It is, if voluminous press reports are to be believed, the biggest story, the biggest deal, ever in China-US business history. I’m talking about the announced takeover of America’s largest pork company, Smithfield Foods, by a company called Shuanghui International. The deal, it is said in dozens of media reports, opens the China market to US pork and will transform China’s largest pork producer into a global giant selling Smithfield’s products alongside its own in China, while utilizing the American company’s more advanced methods for pork rearing and slaughtering.

One problem. A Chinese company isn’t buying Smithfield. A shell company based in Cayman Islands is. Instead of a story about “China buying up the world”, this turns out to be a story of a precarious leveraged buyout deal (“LBO”) cooked up by some large global private equity firms looking to borrow their way to a fortune.

The media, along with misstating the facts, are also missing the larger story here. The proposed Smithfield takeover is the latest iteration in the “take private” mania now seizing so many of the PE firms active in China. (See blog posts here, here, here and here.) With China’s own capital markets in crisis and PE investment there at a standstill, the PE firms have turned their attention, however illogically, to finding “undervalued assets” with a China angle on the US stock market. They then attempt an LBO, with the consent of existing management, and with the questionable premise the company will relist or be sold later in China or Hong Kong. The Smithfield deal is the biggest — and perhaps also the riskiest — one so far.

This shell that is buying Smithfield has no legal or operational connection to Henan Shuanghui Investment & Development (from here on, “Shuanghui China”) , the Chinese pork producer, China’s largest, quoted on the Shenzhen stock exchange. The shell is about as Chinese as I am.

If the deal is completed, Shuanghui China will see no obvious benefit, only an enormous risk. Its Chinese assets are reportedly being used as collateral for the shell company to finance a very highly-leveraged acquisition. The abundant risks are being transferred to Shuanghui China while all the profits will stay inside this separately-owned offshore shell. No profits or assets of Smithfield will flow through to Shuanghui China. Do Shuanghui China’s Chinese minority shareholders know what’s going on here? Does the world’s business media?

Let’s go through this deal. I warn you. It’s a little convoluted. But, do take the time to follow what’s going on here. It’s fascinating, ingenious and maybe also a little nefarious.

CDH, the largest single owner of Shuanghui International, is definitively not Chinese. It invests capital from groups like Abu Dhabi’s sovereign wealth fund , CALPERS, the Rockefeller Foundation, one big Swiss (Partners Group) and one big Liechtenstein (LGT) money manager, along with the private foundation of one of guys who made billions from working at eBay. So too Goldman Sachs, of course, Temasek and New Horizon. They are large PE firms that source most of their capital from institutions, pension fund and endowments in the US, Europe, Southeast Asia and Middle East. (For partial list of CDH and New Horizon Fund Limited Partners click here. )

For the Smithfield acquisition, Shuanghui International (CDH and the others) seem to be putting up about $100mn in new equity. They will also borrow a staggering $4 billion from Bank of China’s international arm to buy out all of Smithfield’s current shareholders. All the money is in dollars, not Renminbi.

If the deal goes through, Smithfield Foods and Shuanghui China will have a majority shareholder in common. But, nothing else. They are as related as, for example, Burger King and Neiman Marcus were when both were part-owned by buyout firm TPG. The profits and assets of one have no connection to the profits or assets of the other.

Shuanghui International, assuming it’s borrowed the money from Bank of China for three years, will need to come up with about $1.5 billion in interest and principal payments a year if the deal closes. But, since Shuanghui International has no significant cash flow of its own (it’s an investment holding company), it’s hard to see where that money will come from. Smithfield can’t be much help. It already has a substantial amount of debt on its balance sheet. As part of the takeover plan, the Smithfield debt is being assumed by Morgan Stanley, Shuanghui International’s investment bankers. Morgan Stanley says it plans then to securitize the debt. A large chunk of Smithfield’s future free cash flow ($280mn last year) and cash ($139 mn as of the first quarter of 2013) will likely go to repay the $3 billion in Smithfield debts owed to Morgan Stanley.

A separate issue is whether, under any circumstances, more US pork will be allowed into China. The pork market is very heavily controlled and regulated. There is no likely scenario where US pork comes flooding into China. Yes, the media is right to say Chinese are getting richer and so want to eat more meat, most of all pork. But, mainly, the domestic market in China is reserved for Chinese hog-breeders. It’s an iron staple of China’s rural economy. These peasants are not going to be thrown under the bus so Smithfield’s new Cayman Islands owner can sell Shuanghui China lots of Armour bacon.

Total borrowing for this deal is around $7 billion, double Smithfield’s current market cap. Shuanghui International’s piece, the $4 billion borrowed from Bank of China, will go to current Smithfield shareholders to buy them out at a 31% premium. Shuanghui International owns shares in Shuanghui China, and two of its board members are Shuanghui China top executives, but not much else. So where will the money come from to pay off the Bank of China loans? Good question.

Why, you ask, doesn’t Shuanghui China buy Smithfield? Such a deal would make more obvious commercial and financial sense. Shuanghui China’s market cap is triple Smithfield’s. Problem is, as a domestic Chinese company listed on China’s stock exchange, Shuanghui China would need to run the gauntlet of CSRC, Ministry of Commerce and SAFE approvals. That would possibly take years and run a risk of being turned down. Shuanghui International, as a private Caymans company controlled by global PE firms, requires no Chinese approvals to take over a US pork company.

The US media is fixated on whether the proposed deal will get the US government’s go ahead. But, as the new potential owner is not Chinese after all — neither its headquarters nor its ownership — then on what grounds could the US government object? The only thing Chinese-controlled about Shuanghui International is that the members of the Board of Directors were all likely born in China. The current deal may perhaps violate business logic but it doesn’t violate US national security.

If the deal goes through, the conflicts of interest between Shuanghui International and Shuanghui China will be among the most fiendish I’ve ever seen. Shuanghui China’s senior managers, including chairman Wan Long, are going to own personally a piece of Smithfield, and so will have divided loyalties. They will likely continue to manage Shuanghui China and collect salaries there, while also having an ownership and perhaps a management role in Smithfield. How will they set prices between the two fully separate Shuanghuis? Who will watch all this? Isn’t this a case Shuanghui China’s insiders lining their own pockets while their employer gets nothing?

On its face, this Smithfield deal looks to be among the riskiest of all the ”take private” deals now underway. That is saying something since several of them involve Chinese companies suspected of accounting frauds, while the PE firms in at least two cases (China Transinfo and Le Gaga) doing the PE version of a Ponzi Scheme by seeking to use new LP money to bail out old, severely troubled deals they’ve done.

Let’s then look at the endgame, if the Smithfield deal goes through. Shuanghui International, as currently structured, will not, cannot, be the long-term owner of Smithfield. The PE firms will need to exit. CDH, New Horizon, Goldman Sachs and Temasek have been an indirect shareholders of Shuanghui China for seven years, already a long time for PE firms.

The IPO plan, as of now, looks crackpot. Hong Kong’s IPO market has basically been moribund for over a year. IPO valuations in Hong Kong are anyway far lower than the 20X p/e Shuanghui International is paying for Smithfield in the US. A separate tactical question for Shuanghui International and its investment bankers: why would you believe Hong Kong stock market investors in two to three years will pay more than US investors are now paying for a US company, with most of its assets, profits and revenues in the US?

But, even getting to IPO will require Shuanghui International to do something constructive about paying off the enormous $4 billion in debt it is taking on. How will that happen? Shuanghui International is saying Smithfield’s current American management will stay on. Why would one assume they can run it far more profitably in the future than they are running it now? If it all hinges on “encouraging” Shuanghui China to buy more Smithfield products, or pay big licensing fees, so Shuanghui International can earn larger profits, I do wonder how that will be perceived by both Shuanghui China’s minority investors, to say nothing of the CSRC. The CSRC has a deep institutional dislike of related party transactions.

Smithfield has lately been under pressure from some of its shareholders to improve its performance. That may have precipitated the discussions that led to the merger announcement with Shuanghui International. Smithfield’s CEO, C. Larry Pope, stands to earn somewhere between $17mn-$32mn if the deal goes through. He will stay on as CEO. His fiscal 2012 salary, including share and option awards, was $12.9mn.

Typical of such LBO deals, the equity holders (in this case, CDH, Goldman, Temasek, Kerry Group, Shuanghui China senior management, New Horizon) would stand to make a killing, if they can pay down the debt and then find a way to either sell or relist Smithfield at a mark-up. If that happens, profits will go to the Shuanghui insiders along with the partners in the PE firms, CALPERS, the Rockefeller and Carnegie foundations, Goldman Sachs shareholders and other LPs. Shuanghui China? Nothing, as far as I can tell. China’s pork business will look pretty much exactly as it does today.

In their zeal to proclaim a trend — that of Chinese buying US companies — the media seems to have been blinded to the actual mechanics of this deal. They also seem to have been hoodwinked by the artfully-written press release issued when the deal was announced. It mentions that Shuanghui International is the ” majority shareholder of Henan Shuanghui Investment & Development Co. (SZSE: 000895), which is China’s largest meat processing enterprise and China’s largest publicly traded meat products company as measured by market capitalization.” This then morphed into a story about “China’s biggest ever US takeover”, and much else besides about how China’s pork industry will now be upgraded through this deal, about dead pigs floating in the river in Shanghai, about Chinese companies’ targeting US and European brands.

China may indeed one day become a big buyer of US companies. But, that isn’t what’s happening here. Instead, the world’s leading English-language business media are suffering a collective hallucination.