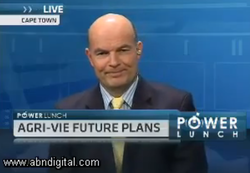 Agri-Vie, a private equity fund focus on food and agri business investments in sub Saharan Africa, has announced the final close of its first fund. The fund attracted investments of about R770m, 10% higher than expected.

Joining ABN with more on this and the appetite for agri investment is Herman Marais, chief executive at Agri-Vie.

[Some of the investors in this first fund who Marais names include the Kellogg Foundation in the US, NorFund from Norway, the African Develoment Bank and the Work Bank's private investment arm the IFC.]