(Rome, 13 October 2010) Today, the problem of land tenure and natural resources was on the agenda of the 36th session of the World Committee on Food security (CFS) of the UN in Rome.

Land-grabbing by private investors and governments has increased massively over the last few years, therefore preventing access to land by current small food producers and future ones as well as imposing non-sustainable forms of agriculture. Through opaque financial structures several European, American and Brazilian banks invest in land-grabbing projects. These investments are contrary to the green image these banks try to project.

It is clear that land-grabbing is an inherent part of the agribusiness model promoted by institutions such as the World Bank, the IMF, IFAD, the FAO or the EU. Creating some vague rules as proposed by the principles of “responsible agriculture investment ” launched by the World Bank will not stop land-grabbing and would even legitimise this huge violation of peasant rights.

As a global peasant movement, La Via Campesina denounces this new form of colonisation that prevents peasants and small-scale farmers from providing food for their communities. 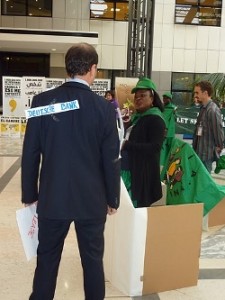 So, if there is a real political will to provide solutions to the food crisis, in which around 1 billion people are suffering from hunger, it is urgent that agricultural policies start supporting small-scale sustainable producers and move away from sustaining an agribusiness model.

In order to find a solution to the problem of hunger, and provide healthy and adequate food to all, access to land is a basic condition.

Therefore, as Henry Saragih, International Coordinator of La Via Campesina stated today at the CFS: “La Via Campesina stressed the importance of the International Conference on Agrarian Reform and Rural Development (ICARRD) which was held in Brazil in June, 2006. ICARRD highlighted the importance of higher, secure and sustainable access to land, water and other natural ressources and of agrarian reform for hunger and poverty eradication.”

For us, genuine agrarian reform means that agricultural land be distributed to landless and small-scale farmers, that governments support agroecological and sustainable peasant agricultural models. It also means that governments protect national and local markets from international commodity and financial markets, and that they build national and local buffer stocks of food.”

Therefore, we support the development of guidelines on land tenure and natural ressources that actively involve Civil Society Organisations as now launched by the FAO as a first step. However, we urge governments to go beyond this and implement completely the commitments stated in the ICARRD final declaration.

Food sovereignty can only be achieved through a genuine agrarian reform!

We feed the world!

The impacts of land-grabbing on farmers: Testimonies from around the globe

La Via Campesina organised a testimony-action yesterday inside the FAO to show the negative impacts of large land acquisitions on peasant farming. The farmer representatives can be contacted for interviews.

Some extracts of the testimonies:

In Congo, the governments make contracts with big companies without asking our advice. Agribusiness is interested in the most fertile lands that are used for food production. They are converted in large monocultures of jatropha or palm oil for exportation to Europe. We, peasants, loose our land and youth are obliged to move to the cities where they become vulnerable. The women go to work in these exploitations as workers with bad conditions. The land no longer belongs to the populations and we can't produce our food anymore, that's why we say NO to lang-grabbing

In Brazil, monocultures arrived to our region and were presented as huge development opportunity but instead in goes against the development of the region.

The way of life of the peasant was presented as retarded, and now with monocultures the time of modernity and development would arrive but instead these monocultures took away the land from the farmers, reduced biodiversity, changed the entire territory. It introduced new productions such as soy, fruits, sugar cane, eucalyptus and reduced the right to access to the natural goods necessary for our lives.

It harmed biodiversity with GMOs and the use of different non-local seeds.

The women who produced before for their subsistency and local markets using their traditional knowledge, were expelled from the lands reducing their social value in the community, increasing their vulnerability to social discrimination and violence.

With the fruit production the exploitation of the workers is constant. Women work 16hrs a day during harvest. Often these negative consequences are not visible in the media. These monoculture industries threaten our food sovereignty. We don't need this kind of development, we want a genuine agrarian reform and assure access to land and to the territories. We want to decide what to plant and how to plant.

In Italy, more and more land of farmers is transformed into industrial or residential areas. It happens in Sabina, agricultural land near Rome, known in Italy for the oil, which is inexorably turning into suburbs of the capital. In particular, it's emerging an industrial area of 200 hectares. The hills are dug out, the fields become foundations. The olive trees are replaced by millions of cubic meters of concrete.

The old farmers in my area commented bitterly: "And now, with all this concrete, what do we eat?"

The farmers sell voluntary, of course, but because there is often no alternative. This happens also because of the bad politics.

The administrators of the territory often produce reckless land plans, not aimed at protecting the environment, manufacturing and the agricultural traditions in the area.

The mirage that carries with the overbuilding in the country is the promise of creating jobs. But this does not always happen, and when it occurs, it is often in the form of degrading work, not comparable to the beauty of cultivating own land.

Even for those who remain and will continue to make sustainable agriculture, the consequences of urbanization of the countryside are heavy.

Who seeks to build a farm or agricultural activity based on a balance with the environment, when all around the area is distorted and disfigured by concrete?

Land grabbing further strengthens down the exodus of the farming profession, which for decades disrupts the social texture of these places.

The concrete takes the place of the fields, bringing pollution and disrupting communities.

Environmental degradation goes together with a social decline.

This is the story of the peasants living in the vicinity of Rome.

But this story is not just about Rome, it's a story that belongs to all of Italy and the whole of Europe. Renaldo Chingore - UNAC I have learnt that my country Mozambique is one of the countries where land-grabbing occurs most often. One of the characteristics of these transactions is there major lack of transparency. We hardly learn anything about them. Most of the land is used for the production of agrofuels for Europe and it increased when Mozambique signed an Economic Partnership Agreement (EPA). We have learnt that China is also signing contracts for rice production and that Brazil and the EU have signed contracts for the production of ethanol on a superficie of 4,5 millions of hectares. Where is this land? Our land laws are quite progressive and it states that land can't be sold and that the local communities have to consent to lease it. These untransparent contracts are a violation of our land law and of the human rights of the peasant communities. Henry Saragih - SPI In Indonesia, land-grabbing is not a new issue since it already occurred during the colonisation. However, now institutions like the World Bank and the IMF push governments to privatise and open their markets so it is legitimised by governments. This should really change. The lands should be in the hands of those who produce food and not in the hands of Transnational Companies to produce agrofuels, or to provide false solutions such as the reduction of carbon emissions (REDD) or false arguments as the solution of hunger with unsustainable productions.
Press contacts