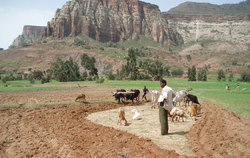 The lines have been drawn in the “land grab” debate: Will foreign investors displace small, local land-holders, damaging the environment with exploitive practices? Or will a combination of infrastructure investment and employment opportunities lead to a virtuous development cycle?

Recent reports suggest that the former is more likely than the latter (e.g., see the Oakland Institute, GRAIN, and the Food and Agriculture Organization). In each case, the proposed antidote is the typical wish-list: Boost institutional capacity to ensure that agreements are honored, environmental and labor regulations are observed, and local populations are given a stake in the process.

While it incorporates a broader swath of data and country case studies, the recent World Bank report, “Rising Global Interest in Farmland: Can It Yield Sustainable and Equitable Results?” largely recycles this tired diagnosis, as noted recently by Michael Kugelman on The New Security Beat.

But the two months we spent in the Amhara and Oromia regions of Ethiopia, surveying smallholders and profiling large-scale commercial farms, left us with a different impression. After completing 1,200 pages of surveys on smallholder livelihood strategies and farm management practices with 120 local farmers, as well as six profiles of private investors’ farms, we identified several key points that these reports missed.

The World Bank report focuses on the belief that countries with weak institutions attract predatory investors, who use lack of oversight to their advantage by exploiting local populations, abusing regulations, etc. Ethiopia, however, has high institutional capacity relative to other African nations, yet still receives enormous land investment.

Every commercial farm we profiled received yearly visits from multiple regional and federal agencies investigating regulatory compliance. Moreover, two of the farms had been sold to their current owners because the previous business ventures failed to observe the terms of their business proposals. These terms included bringing certain amounts of foreign exchange into the country and hitting export targets.

Ethiopia attracts investors for other reasons. Official documents tout the diversity of its micro-climates, but we suspect investors are more likely drawn by a lease rate roughly 100x lower per hectare than the African average.

Given the emphasis on boosting institutional capacity as a means to ensure positive development outcomes, it’s too bad that the World Bank didn’t choose to conduct one of its case studies on Ethiopian commercial farms. Such a study could provide grounds for discussing what investment governed by stronger institutions would look like.

The potential for population displacement (with or without compensation), job creation, and infrastructure development is a well known and well studied paradigm. The World Bank report investigates the occurrence of these phenomena in its case studies, and the results are unsurprising: Sometimes things go OK and sometimes they go badly. This same story emerges in studies of foreign investments of all stripes: logging, oil and natural gas extraction, precious mineral mining, among others.

A more inventive analysis of land grabs could yield meaningful findings, however. Investors and smallholders are engaged in the same activity — farming — and in the case of cereal farms, they are producing the same crops. The resulting overlap allows for a multitude of creative interactions between smallholders and investors that should receive more attention.

Two of the investors we interviewed used these creative interactions to promote their business plans to regional development authorities. One farm sold certified seed to local farmers; another imported an irrigation system new to the region and plans to introduce it to the broader community. They each rented farm equipment to smallholders and held demonstration days to discuss farming techniques and new crop types with community members. One had already introduced new crops to the adjacent village via an “outgrowing” scheme and was exporting smallholder products from the farm, thus diversifying livelihoods for local farming households.

These are, of course, anecdotal accounts. But they suggest a broader point: More attention must be given to “secondary” benefits like technology and knowledge transfers, outgrowing or renting schemes, and informal interactions. Given the unique attributes of large-scale commercial investment in the agricultural sector, which continues to provide most Ethiopians’ livelihoods, these secondary benefits are the mechanism through which livelihoods seem most likely to be transformed. In this case, the preoccupation with displacement, formal compensation, jobs created, and infrastructure development only leads to generalized and ineffective analysis.

Our smallholder surveys and commercial farm profiles point to one conclusion: The commercial farms in our sample that engaged most fully in those creative interactions will generate substantial benefits for local populations over the next 5-10 years (quantitative analysis to be published in our final report this spring). The particular interactions taking place between these smallholders and commercial farms directly alleviate the primary constraints to smallholder livelihoods identified by our survey, such as lack of mechanization, lack of access to inputs, and inability to generate cash through sale of crops.

It’s far from clear that the World Bank analysis would have captured this reality in Ethiopia given its limited focus. Ideas like outgrowing receive scant attention, and are usually only discussed in hypothetical terms or in parentheticals – a trend the World Bank report unfortunately continued.

So while our limited analysis may not enable us to speak broadly about the effects of commercial farming, we can offer two observations.

First, the creative arrangements that accompany the introduction of commercial farming must be front and center of any study. The study should be grounded in an understanding of the livelihood constraints faced by local populations, followed by an analysis of the types of interactions between commercial farms and smallholders that may affect those constraints, including not only traditional effects, such as displacement and employment, but also atypical impacts, such as improved seed distribution and technology demonstration.

Second, since Ethiopia has enough institutional capacity to be selective when choosing commercial investors (and to ensure they adhere to the terms), it embodies a number of principles the promoted by the World Bank report. Ethiopian Prime Minister Meles Zenawi views large-scale private farms as one piece of a broader commercialization effort to revolutionize smallholder agriculture, as described in the government’s development plan, PASDEP. This effort is in keeping with the report’s basic recommendation that host governments ensure that investment is compatible with domestic needs.

Understanding the phenomenon of large-scale land acquisitions should be at the top of the international research agenda. The effects on livelihood security and food security (in both developed and developing countries), as well as the potential contributions to resource conflicts, place such land deals among the most consequential recent trends in the international arena.

We believe a new framework must be brought to the analysis of land grabs. To effectively implement this framework, important but overlooked cases, such as we found in Ethiopia, should be included in future studies.

Nathan Yaffe and Laura Dismore are students at Carleton College, who just returned from researching commercial farming in Ethiopia. They can be reached at [email protected] and [email protected] Photo Credit: Adapted from "P8060261," courtesy of flickr user Ben Jarman.